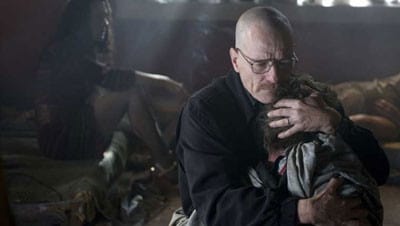 At his apartment, Jesse frantically tries to revive Jane, who choked on her own vomit overnight. Distraught and panicking, Jesse calls Walt — unaware of his role in facilitating Jane’s death — who assures him everything will be okay. Cuddling Holly in his arms, Walt assures Jesse, “I know who to call.”

A short time later, a man named Mike Ehrmantraut is sent to the apartment by Saul. Mike gathers Jesse’s drug paraphernalia and cash, clearing away all the evidence. Smacking the shell-shocked Jesse, Mike coaches him on how to respond to medical investigators and tells him to not disclose that he was there.

Meanwhile, Skyler and Junior are excited by the apparent donations being donated through SaveWalterWhite.com, unaware that the donations are in fact Walt’s own laundered drug money. Skyler chides her husband for seeming unenthused.

Donald drives to Jane’s apartment, leaving a voicemail warning her to be ready to go to rehab. However, when he arrives, Donald is distraught to find an ambulance on the scene. He immediately realizes what has happened.