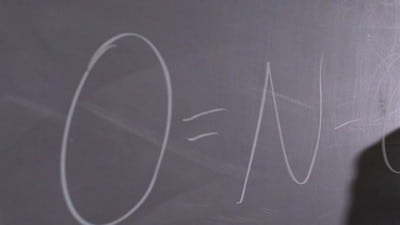 Walt heads to Jesse’s apartment after repeatedly trying to reach him by phone. Pounding on the front door, Walt attracts the attention of Jesse’s landlord, Jane, who refuses to grant him access even after he claims to be Jesse’s father. Jesse finally appears at the door, and tells Walt to come in.

Inside, Walt scolds Jesse for holing up in his apartment and getting high. After learning that one of the junkies who ripped off Skinny Pete is dead, Walt says that he didn’t want anybody to get killed. Jesse tells Walt that he couldn’t stop Spooge’s girlfriend from crushing his head with the ATM machine because she’d stolen his gun. Jesse can’t stomach witnessing the gruesome murder, and is relying on pot to cope.

At his new office in El Paso, Hank mocks the idea of drug dealers praying to their patron saint, Jesús Malverde, and is the only one laughing at his own joke. When he asks his colleague Vanco why the saint’s statue sits on his desk, the agent quotes Sun Tzu’s The Art of War in saying that it’s to help him know his enemy.

Jesse is due to make an exchange with Skinny Pete, Badger, and Combo, but is still distraught and refuses to leave his apartment. Walt goes in his place, meets the three at the National Museum of Nuclear Science & History, introducing himself as “Heisenberg.” Handing over the latest haul, Skinny Pete tells Walt that because rumor has it that Jesse murdered Spooge, everyone is now afraid of him. Walt doesn’t let on that the rumor isn’t exactly true.