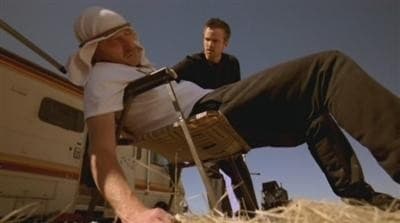 Saul gives Walt a tutorial on money laundering. After all the costs associated with Badger’s arrest, Walt has $16,000 left, of which he would receive only $9,960. Walt lets on that he might not have much longer to live, but intends to cook a lot more. Elsewhere, Skyler suggests a weekend outing to take the family’s mind off the test results, but Walt says that he wants to visit his mother to ensure she’ll leave money to Skyler if he dies.

Jesse makes plans with Jane to visit the Georgia O’Keeffe Museum in Santa Fe, but Walt derails the getaway when he tells Jesse that they need to cook non-stop until Tuesday. When Jesse balks, Walt tells him that their methylamine is losing its chemical potency.

Skyler drops Walt off at the airport and drives away. After a moment, Walt exits the airport and Jesse pulls up in the RV to take Walt to their cook session. They drive deep into the desert and prepare for a long cook. When Walt scolds Jesse for tossing the RV’s keys on their workspace, Jesse leaves the keys in the ignition. Unbeknownst to the duo, an indicator lamp on the dashboard lights up.