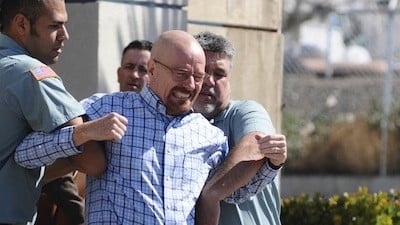 Mike visits Saul and plays an audio recording of Walt and Skyler’s bitter argument over her affair with Ted. Later, Walt heads to Beneke Fabricators to confront Ted, who refuses to see him. As a mortified Skyler and her co-workers watch, Walt tries and fails to throw a huge potted plant through a window into Ted’s office. Three men arrive and toss Walt out the front door. Seconds later, Mike drives up in his car and whisks Walt away.

At his office, Saul stages what he calls an “intervention” for Walt. Wondering how Saul knew where to find him, Walt realizes that Saul had his house bugged. When Saul admits he did and provocatively gives a crude description of Skyler’s affair, Walt tackles him to the ground. Walt angrily tells Saul he is fired while Saul tells Walt that he will no longer launder Walt’s drug money through his son’s website.

At Walt’s insistence, Mike removes the bugs from his house. Before he leaves, Mike notices a drawing of a scythe drawn on the street outside of the house, presumably left by the Cousins.