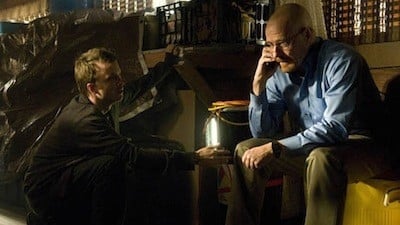 Skyler calls Walt to discuss the signed divorce papers she found in Holly’s crib. Skyler objects to the idea of Walt using his drug money to pay child support, only to contend that Walt has been using that money to pay their bills for the past few months. Walt is looking at a model condo, which he offers to buy with its furnishings. Meanwhile, the Cousins enter Los Pollos Hermanos. Gus watches as they sit down in a booth without ordering anything.

At Jesse’s house, the blue meth Jesse has made without Walt dazzles Badger. Jesse invites Badger and Skinny Pete to rejoin him in the business. Jesse proposes that Badger get Clovis to fix up the RV while Skinny Pete procures supplies. As Skinny Pete and Badger depart, they have no idea that Hank is watching them from his SUV parked down the street. Hank recognizes Badger and can hardly contain his glee.