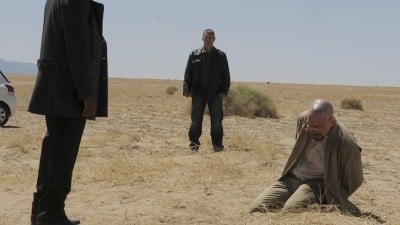 Walter White cooks another batch of meth alone in the superlab with Tyrus Kitt hovering over his shoulder. He asks about Jesse and what should be done with Hank Schrader; as usual, Tyrus is a man of few words. When they weigh the meth, Walt tries to add 0.02 pounds to the total in a failed attempt to implicate Tyrus in stealing the product; which Tyrus immediately reweighs and corrects, much to Walt’s chagrin. Later, Walt sits with Hank in his car while Hank patiently watches Gus’s chicken farm. There was a big cartel incident in Mexico, Hank says, with many bodies, which causes Walt to worry about Jesse. Hank brings up the subject of Walt’s face, which still has many cuts and bruises from the fight with Jesse, and assures him that if he’s in over his head with his gambling, he is the guy to talk to.

Back in Mexico, Mike is asleep and receiving a blood transfusion. The whole scenario was planned out from the beginning, with the doctors prepared with the medical history and correct blood types for the trio. Jesse’s amazed that they even had bags of his blood-type ready, as well as info on his allergies. The doctor says Mike will need at least a week of rest before he can travel, so Gus tells Jesse he’ll send for Mike later and they set off to leave without him.

It’s a six-mile walk north to Texas. Gus congratulates Jesse on his performance in the ordeal and says he’s proved he can run the superlab on his own. Jesse insists that in that case they have a problem, as he won’t cook if Walt is killed.