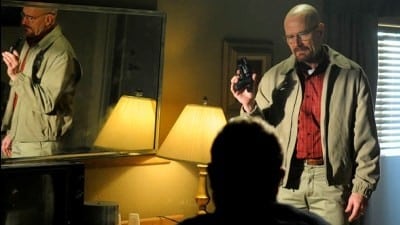 Having coffee at a bar, Mike Ehrmantraut discovers Victor’s dried blood on his jacket sleeve. He wipes it off, unsettled.

Jesse Pinkman shows off his powerful new sound system to Badger and Skinny Pete. He then tempts his friends, who are in recovery with meth. Badger and Skinny Pete quickly cave, get high and discuss the finer points of video game zombies. Jesse decides to throw a party and the house quickly fills with dozens of people drinking and dancing.

At his condo, Walt practices drawing the revolver; he’s getting better and better.

Marie Schrader wakes in the middle of the night to find Hank Schrader examining his minerals. When she mentions how late it is, he pointedly notes that the house has other bedrooms.

The next morning, Walt chastises Skyler White for discussing their intention to buy a car wash over the phone. They’re not talking about purchasing a brothel, she counters, adding that if Walt isn’t willing to pull the trigger on the deal then she’ll contact Saul Goodman directly.

Jesse, meanwhile, tiptoes through the passed-out partygoers. Peeling off some large bills, Jesse instructs Badger to buy everyone breakfast and keep the party going until he returns. At the lab, Walt tucks his gun in his belt, waiting for Gustavo Fring to arrive. When someone enters the laboratory and appears at the top of the stairs, Walt prepares to draw. Only instead of Gus, who arrives is actually Victor’s replacement, Tyrus Kitt, there to pick up the latest batch. When Mike demands a second weighing (“new policy”) Walt asks to see Gus to “clear the air.