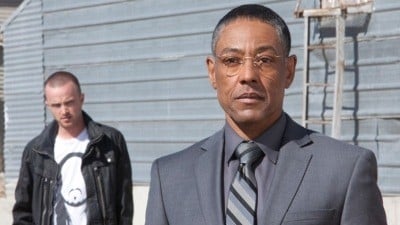 At the car wash, Walter White grouses about the restocking fee the dealership is charging to take back the Challenger. Skyler White pleads with him to just return the car and not make a scene. She wants them to be done with it. Instead, Walt drives to an empty parking lot and races around recklessly, laying heavy rubber and doing doughnuts until the car runs aground on a parking block. Without a pause, Walt gets out, sets the car on fire and casually calls for a taxi as he sits down on the concrete and watches it burn.

Walt slumps in a chair at Saul Goodman’s office while Saul handles the fallout from his client’s “little joy ride.” Walt admits that the pressure of knowing Gustavo Fring wants to kill him is getting to him, and then inquires about hit men. Saul points out that any for hire assailant would likely know Mike Ehrmantraut, and have to outmaneuver him. Walt tells Saul that he tried to kill Gus himself but couldn’t get near him.

That night at Jesse’s house, while Jesse repaints his graffitied/damaged walls, Walt interrogates Jesse about how close he’s been to Gus lately. Closer than they are right now, Jesse says, adding, “He said he sees something in me.” Walt attempts to manipulate Jesse, ironically asking if he’s that easily manipulated by Gus. If he’s already forgotten what Gus attempted. Walt reminds him Gus tried to kill them both, did kill Victor, and lied about not targeting children the day Andrea’s brother Tomás was shot — he’s making his case for Jesse to take action. Jesse barks back at Walt. Walt smiles, inwardly triumphant, pleased to get Jesse just where he wants him.