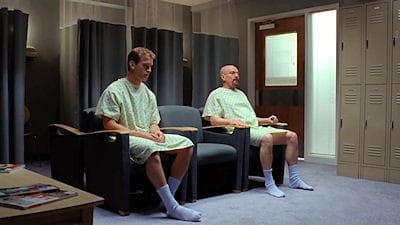 Back in the present at an oncology clinic, another patient tries to commiserate with Walt, who is not in the mood to talk. Walt dismisses the young man’s suggestion that cancer has put the man’s life on hold. Later at the superlab, Gus observes Walt’s every move on the security camera feed; despite his vehemence, Walt’s not in charge of anything right now.

The APD and DEA summon Gus to APD headquarters, where he notices a Person-of-Interest sketch of Victor on a bulletin board. Hank Schrader, APD Detective Tim Roberts, Steven Gomez and ASAC George Merkert then greet a fully composed Gus. Tim reveals that Gus’s fingerprints were found at a murder scene. Hank scrutinizes his every word and move intently and Gus summises they are referring to Gale Boetticher’s apartment.

Gus explains Gale was given a chemistry scholarship that Gus established some years ago to honor Maximino Arciniega. Gale reestablished contact recently, and over dinner at Gale’s apartment (thus explaining Gus’s fingerprints) he proposed a vague investment opportunity that Gus declined. That would seem to explain everything, but Hank presses on before rattling off Gus’s bio. Hank wonders why no record of Gus exists in Chile. This catches Gus by surprise, but he’s perfectly composed, recovering instantly. Gus assures Hank that he’ll locate documentation eventually if he persists.