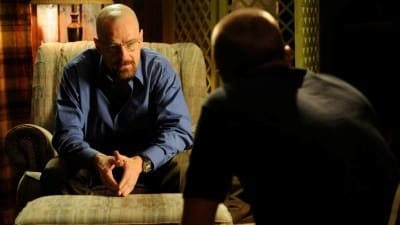 Todd argues his case to Walt, Mike, and Jesse about murdering Drew, claiming that, although it was harsh, it was their only option. He only did as they insisted upon. Jesse is fuming, hardly able to contain himself. The three men send him out of the room to discuss his future in their operation. Jesse, appalled by his actions, does not feel safe with him around and wants him gone. Walt proposes three options: Firstly to fire Todd, bearing in mind that he knows too much and would probably need to be paid for his silence. Second would be to “dispose of him”, not an appealing proposition they all agree in silence. The third to demote him back to tenting houses and setting up the lab, keeping him close and in the business as a precaution.

While Jesse prefers to fire Todd, Mike and Walt vote to keep him in the business. Mike delivers the news to Todd, but also berates him for his reckless actions, and makes a thinly-veiled threat to kill him if he ever does anything like that again.

At a park with his granddaughter, Mike is watched by Steven Gomez and Agent Van Oster. Later, as Mike’s about to leave, he quickly scribbles and hides a note under a nearby garbage can, then calls to his granddaughter and leaves. The DEA agents debate whether to follow him or wait for someone to pick up the dead drop. Gomez approaches the note to investigate and finds that it reads “Fuck You.”