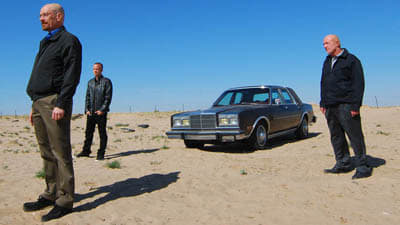 In the middle of the desert, Walter White addresses Declan and his bodyguards about the methylamine deal Mike and Jesse Pinkman had previously arranged. Declan is not pleased to hear there’s no methylamine and that Walt is keeping it all for himself. Walt offers to continue cooking his 99.1% pure Blue Sky. Walt explains that the substantial difference in quality between his and Declan’s product (±70%) means they attain a higher yield, which means they have more control over price and by extension a higher a profit margin.

He offers Declan’s organisation the chance to buy out Mike’s 1/3 share and be Walt’s distribution channel, guaranteeing that they would make more money with that cut than they would on their own. To further prove his point, Walt demands that Declan “say his name”, to which Declan feigns ignorance. But after a little more convincing and at Walt’s insistence, he resignedly agrees and acknowledges Walt as Heisenberg.