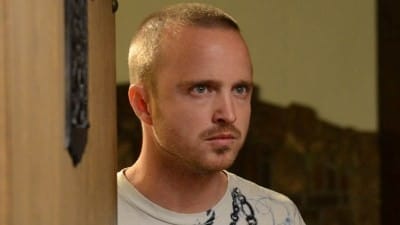 
Plot : Gliding Over All

Walt, in deep thought, is observing a fly at Vamonos Pest when Todd informs him that he has disposed of Mike’s car. The two walk to Walt’s car and open the trunk, where Mike’s body is being kept. Walt lies to Todd and claims that Mike’s death had to be done and the two prepare to dissolve his corpse in acid. The garage door suddenly opens, prompting Todd to close the trunk. Jesse enters, asking if Walt met with Mike, and if Mike got the money and got away.

Walt evades the question, saying only that “Mike is gone.” Jesse questions what should be done about Mike’s men, suggesting a vote. Walt tells Jesse that now that he has quit, he no longer has a vote and that Walt will handle it himself. He quickly ushers Jesse out of the garage with a stern glare. The door descends between them.

Visiting Dennis at Metropolitan Detention Center, Hank rejects a proposed plea deal from and his lawyer, and leaves to look for a better deal from another former associate of Gus. Meanwhile, at The Grove cafe, Lydia defensively refuses to give Walt the names of Mike’s men, and the now-incarcerated lawyer who paid their families. She reminds Walt that there’s now a tenth name (Mike’s lawyer) but states she has not written the names down, and will only divulge them after her safety is assured.

She surmises Mike has been eliminated, which Walt confirms. Eager to be of further use to him, Lydia proposes a new business plan to sell Blue Sky in the Czech Republic — where purity of meth is 60% compared to Walt’s 99% — using her trusted associates on various levels at Madrigal. After negotiating a 30% commission of their joint business, Lydia gives Walt the names. After she leaves, Walt lifts his hat off the table, disclosing hidden beneath that he had brought the ricin capsule to the meeting (implying that he had intended to kill Lydia to tie up another loose end) but decided not to use it after accepting Lydia’s new offer.