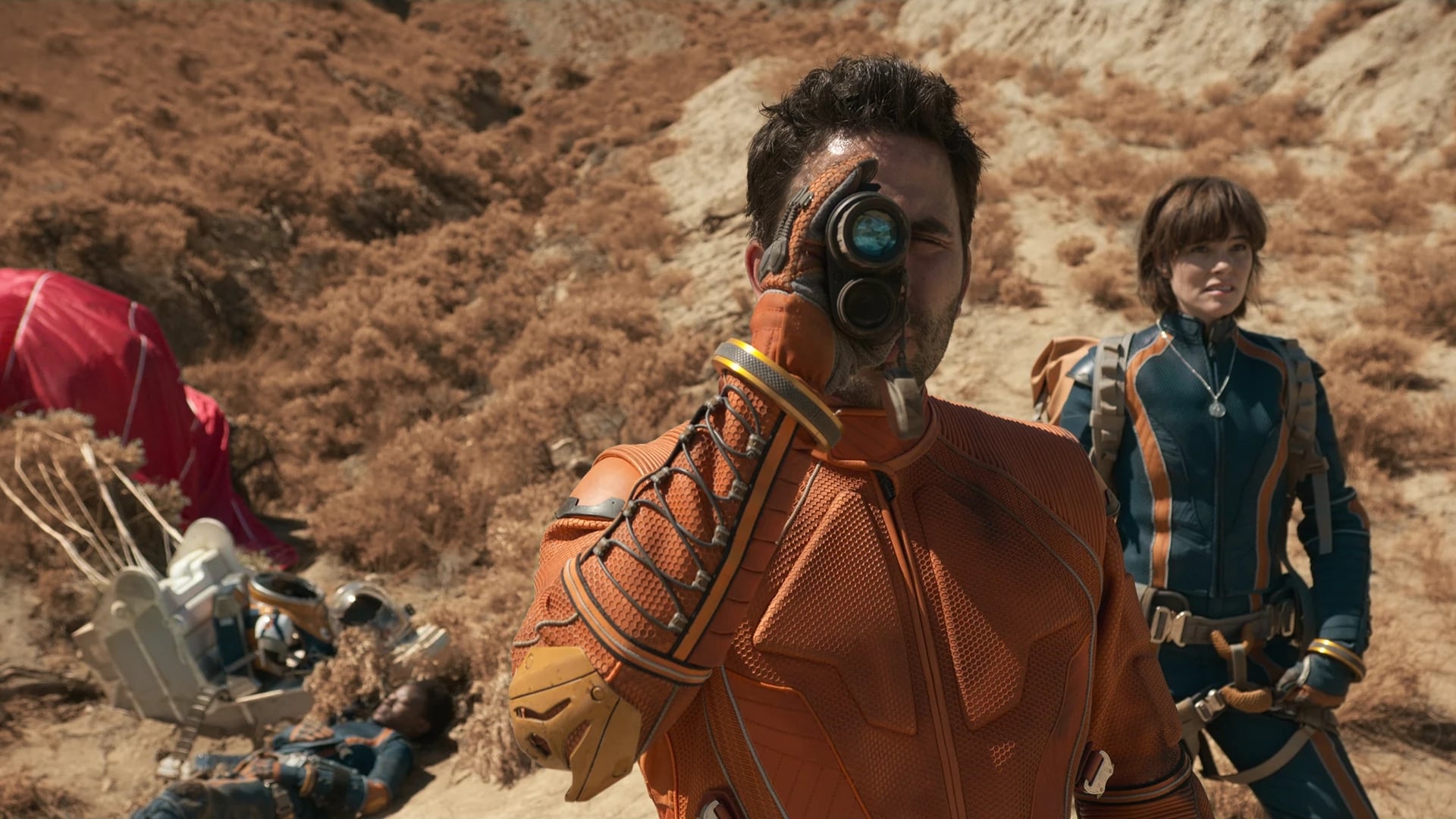 
Plot : Diamonds in the Sky

As an alarm sounds, a man in a space helmet awakes suddenly. A chicken clucks, perched on half-broken debris. The vessel is hanging on the edge of a cliff. The man groans as he struggles to remove his spacesuit. A part of the vessel falls away and the man jokingly asks if the chicken can get it for him. He calls to a woman in the vessel, Tam, asking if she’s there. Instead, another woman tells him that she’s stuck and he explains that the sand has jammed the restraints.

He asks her to toss him her knife, saying that it’s the only one they have, so not to drop it. She asks what happened to his, and he admits that he dropped it. She reluctantly tosses the knife and he manages to catch it, telling her he’s the person she’d most want to be stranded with in an in emergency situation. He manages to free himself and starts heading for her as the ship continues to break apart. He struggles to reach her as the situation becomes more precarious. He tells her to try to climb out without moving. He pulls her away, heading into the title display.

Maureen Robinson reluctantly reaches to touch the Robot and Will tells her that it’s okay. She chuckles, saying she knew that they weren’t alone. She explains that the robot is synthetic, and Penny asks if they still make the history books even if it’s a robot. Will says she only gets to be famous for being related to him. Maureen asks the robot if he has a name or knows where they are. Will explains that he saw the Robot’s spaceship, so he’s not from the planet. He says that he thinks he crashed when they did and that he thinks he’s all alone and hurt. The Robot steps forward, and uses its heat to melt the water and start heading under for the Jupiter 2. John spots a rip in Will’s jacket and asks how it happened. He says it must have happened when he fell.

Back at the other spaceship, which is identified as Jupiter 18, the man and the woman have managed to get outside. He asks if Tam maybe has a toolbox. They joke about the unlikely possibility of him fixing it. The chicken clucks and the woman looks over a photo album. He tells her to not get sentimental, that he’s not carrying her bag when it gets too heavy.

He finds a necklace and gives it to her. He then spots Tam and races over to her, finding her badly injured. He asks for the woman’s help, but she tells him that she’s not that kind of doctor. He tells her it doesn’t matter and starts taking her boots off. She says she thought they were friends. He says that she would have done the same. She suggests he could show some decency and he tells her to bury her if she wants, but he’s going to make sure nobody buries them. He sends up a flare.