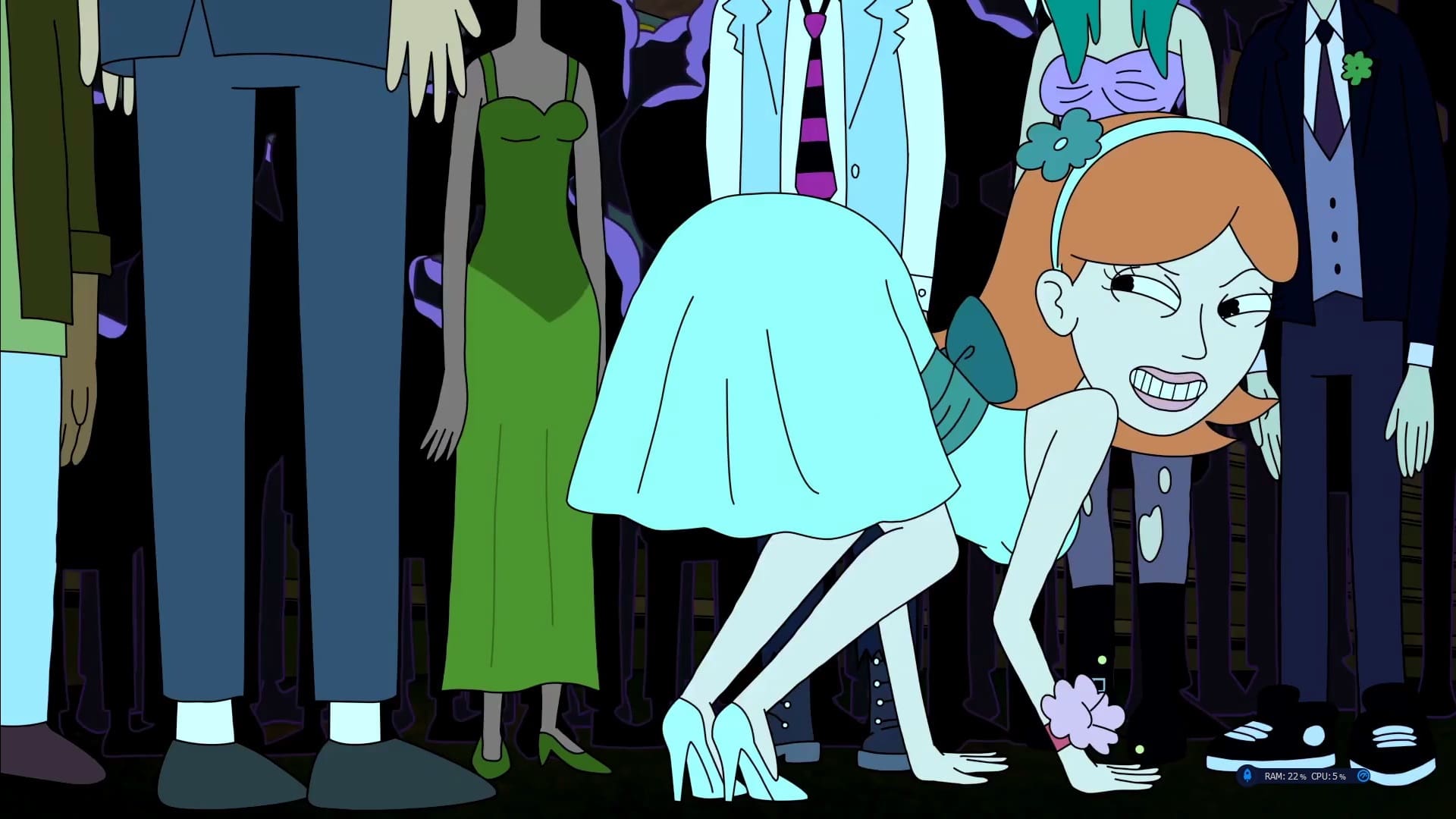 Morty is very interested in Jessica, but lacks the opportunity to ever talk to her as he’s either too shy or his attempts are shut down by Brad whenever he tries. With the annual Flu Season Dance coming up, Morty talks to Jerry about his issue. Jerry compares Morty’s fondness for Jessica to his own fondness for Beth when he was a teenager. Rick overhears Jerry’s story and reminds him that said fondness resulted in Jerry getting Beth pregnant at 17. Rick proceeds to warn Morty not to go to Jerry for romantic advice because, “his marriage is hanging on by a thread”.

An insulted Jerry remarks that there isn’t a problem with his marriage. Unconvinced, Rick tells Jerry that he can believe what he wants but it’s pretty obvious that Beth is looking for an excuse to leave him. Morty becomes upset and asks Rick not to talk about his parents in that fashion. In response, Rick tells Morty that what people interpret as, “love” is just a chemical that causes animals to breed and once that has happened, any true passion fades away. After Rick leaves, a depressed Morty goes upstairs to prepare for the dance and a nervous Jerry goes to check on Beth.

Thinking about what Rick told him, Morty approaches Rick and requests a potion that can make Jessica like him. After a brief argument, Rick calls Morty a, “thorn in his ass” and gives Morty a serum based off the genetic makeup of voles, a rodent that pair bonds with its mate for life. Before leaving, Morty asks if there’s anything that could go wrong with the serum and Rick answers no. Once Morty has left, however, Rick quickly adds, “unless she has the flu”, but shrugs it off.

At the dance, Morty uses the serum on Jessica, and, save for her dilated pupils, it seems to be a success. When Brad sees Jessica holding Morty, he becomes angry and tries to wrestle him away from her. Things only get worse when Jessica begins to sneeze. The serum, which has piggy-backed onto the flu virus and has caused the virus to replicate in seconds, is seen to go airborne, infects Brad with the serum. Brad quickly apologizes to Morty but begins to make sexual advances on Morty which leads to another scuffle between Jessica and Brad.

Eventually Principal Vagina leads Brad away, while Brad sneezes causing the serum laced flu virus to enter the fruit punch and air vents. Soon everyone at the dance is infected with the flu and subsequently the serum. Morty prays that everything go according to plan, when Jessica starts aggressively telling Morty to have sex with her on the spot, in front of the entire school. Morty is unsurprisingly mortified and Jessica’s friend tells her to control herself, before she begins to make advances on Morty as well. Morty slowly backs up and notices that everyone in the room now has dilated pupils and they’re all looking at him lustfully. Realizing what has happened with dread, Morty feebly whimpers, “Oh, crap!”.

The students and faculty swarm around Morty, with each of them violently competing to have Morty for themselves. Morty eventually manages to get away from everyone and makes a break for the exit where Rick is waiting for him. Rick tells Morty that he realized that he messed up and explains how this all happened. Terrified, Morty asks Rick what they’re going to do and Rick tells him that he’s already whipped up an antidote using praying mantis DNA as the base, claiming that they’re the, “opposite of voles” due to their nature to only mate once before the female devours the male.

Rick releases his antidote along with a second, more powerful airborne virus. Upon releasing the new airborne serum, Rick tells Morty that the serum doesn’t affect anyone related to Morty by blood so luckily it means none of his family will want to have sex with him. For a moment, the antidote appears to have been successful, until everybody starts growing mantis-like features and other appendages. Now not only do they still wish to copulate with Morty but also have the urge to behead and eat him afterward. This Mantis-love virus soon infects the entire Earth population, all of which not only wish to mate with Morty but consume him afterwards.