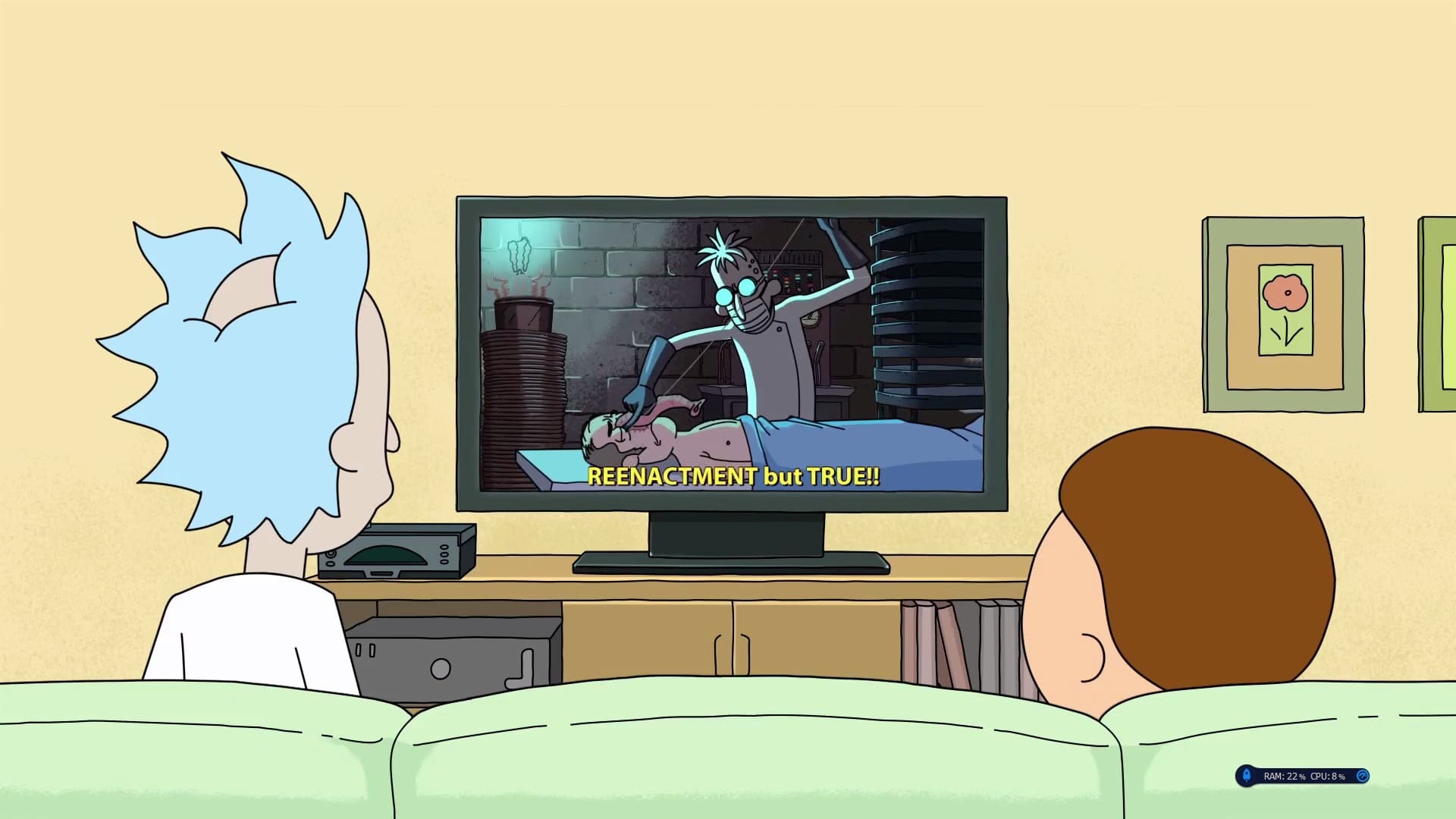 The Smith Family are gathered around the television, invested in a ‘Bachelor’ style reality show. Rick expresses disgust at the quality of television, and Jerry challenges him to provide anything better. Rick destroys the existing cable box and installs his own: a cable box capable of receiving television across infinite dimensions. The shows featured in these alternate realities vary wildly, such as a Showtime crime show in a reality where people evolved from corn. Rick flips through the channels to show the endless possibilities, before the family sees Jerry in an episode of David Letterman, in a reality where he was a famous movie star. This excites the rest of the family, and Rick gets annoyed feeling that they are getting obsessed about the wrong things.

Rick pulls out a pair of Inter-Dimensional Goggles that he throws into the kitchen, in which Jerry, Beth, and Summer chase after. Morty says he does not care about himself enough to see what his alternate self would be like, in which Rick congratulates him. The two then watch various commercials and clips from alternate realities.

Meanwhile, Jerry, Beth, and Summer are in the kitchen taking turns using the goggles. Jerry sees himself doing cocaine with Johnny Depp while Beth sees herself operating on a person instead of a horse. Summer has trouble finding any other realities of her, except for a moment of the family playing Yahtzee. It’s during this time that she first finds out that she was an unwanted pregnancy, and the news upsets her greatly. Seeing her parents achieve their dreams in realities where she was not born, she tells them that she is running away.

The alternate realities of their lives shake Jerry and Beth to the core, and they decide that maybe it’d be better to spend time apart. Summer goes upstairs and begins to pack, and Morty attempts to console her. She attempts to push him away before he points outside to the graves in the backyard (from the episode “Rick Potion No. 9”). He reveals the truth that he is not, in fact, her brother but a brother from another reality. Morty tells Summer “Nobody exists on purpose, nobody belongs anywhere, everybody is going to die….Come watch TV?”