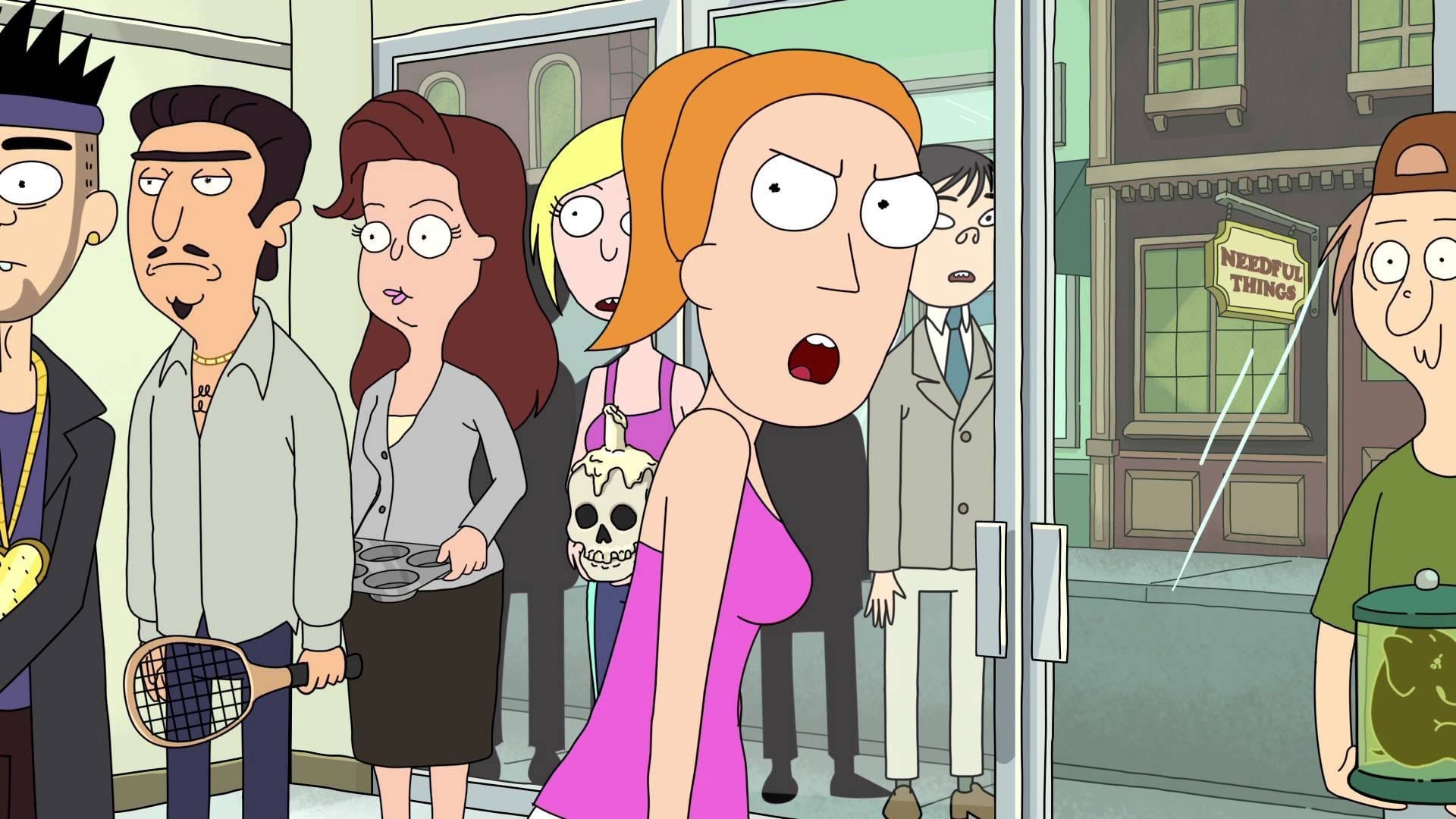 
Plot : Something Ricked This Way Comes

The Smith family are eating breakfast. Rick creates a small robot purely to pass the butter on the table when Morty comes into the kitchen to ask Rick to help him on his science project. Jerry jumps at the opportunity to work a project with Morty due to his low self-confidence about his intelligence. Morty decides to agree. Summer asks for a ride to her job, which is defaulted to Rick since Jerry is ‘busy’.

Rick gives Summer a ride to her job, which is helping out an eccentric old man run a ‘vintage thrift store’ called Needful Things. The shop is run by Mr. Needful, and has just opened recently. Before Rick and Summer arrive, Mr. Goldenfold arrives by accident (thinking the shop was a Jamba Juice). Mr. Needful knows his name without introduction and gives him an aftershave to help capture female attention. The aftershave is free, but Mr. Needful states “Nobody ever pays here…not with money”.

Summer and Rick arrive into the shop, and Rick is immediately suspicious of Mr. Needful, asking whether he is the devil. This accusation startles Mr. Needful who quickly tries to give Rick a microscope, which Rick reluctantly takes as Summer pushes him out the door. Meanwhile, Jerry and Morty begin to work on a solar system model for his science project. Jerry states that Pluto is a planet and Morty attempts to correct him. However, Jerry refuses to say that Pluto is not a planet.

Morty visits Rick in his garage, where Rick scans the microscope and finds that using it would have significantly lowered his IQ. Jerry barges in assuming Morty is asking Rick about whether Pluto is a planet or not. Jerry vehemently argues that if it was once a planet, it could be a planet again. Mr. Goldenfold returns to Needful Things, saying that the aftershave worked but made him impotent.

After Rick arrives and administers a cure into Goldenfold, he reveals that he has invented a device to identify the negative effects of the cursed items. Rick goes around the store, scanning all the items and revealing their curses which scares away the customer base. Mr. Needful and Rick briefly fight before Summer pushes Rick out the door.