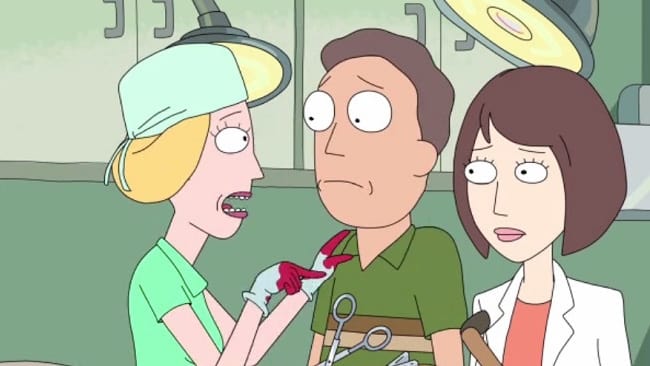 
Plot : A Rickle in Time

Rick, Morty, and Summer get into trouble when time is fractured by a feedback loop of uncertainty that split reality into more than one equally possible impossibilities. Meanwhile, Beth and Jerry go to extreme lengths to save a deer struck by their vehicle

The episode opens with time still frozen from the ending of Season One. Outside of the Smith Residence, Morty and Summer finish up some last minute cleaning duties while Jerry and Beth are still frozen outside. It’s revealed that time has been frozen for nearly six months. Before Rick unfreezes time, he admits that ‘their’ time may need time to stabilize back within the ‘world’s time’. As a precaution, he tells Morty and Summer not to touch their parents at all, or otherwise their existence might fall apart at the seams.

When time is unfrozen, Mr. Benson falls off the roof while both Jerry and Beth are very clearly confused with the entire house not destroyed. Rick insists that Jerry was just seeing the negative and he warmly greets Beth. Beth attempts to hug her father and children, but they pull back, insisting it’s because they missed them a lot and hugging would destroy them (it literally would). As a means to play it safe, Rick bribes the two into leaving to buy ice cream. He kicks a pile of unmarked bills to get them out of the house. Soon, Morty and Summer experience a bit of sibling rivalry over who’s closer to Rick.

As they shove each other, it generates a direct rift in time, creating two parallel realities which exist separately from each other. Rick tells his grandchildren that their ‘uncertainty’ has caused time to fracture into two equally possible impossibilities. Rick says they aren’t in any timelines, and to prove it he opens the garage door to reveal the house floating in the middle of a black void surrounded by Schrödinger’s cats.

After getting ice cream, Jerry and Beth accidentally strike a deer. The deer isn’t killed but severely injured. Beth takes it upon herself to help heal the deer. Beth takes the deer into a veterinary hospital and attempts to perform surgery. Before she begins her procedure, she notices a gunshot wound in its side. A hunter appears and says he was the one who shot him. He claims the deer belongs to him and calls his lawyer to help him gain ownership. The hunter’s lawyer appears at the animal hospital and lets them know about Brad’s Law and how legally the deer belongs to the hunter. Beth ignores him and continues to operate.

Rick uses a Time Crystal to try to mend the timelines together, but Morty and Summer’s continued uncertainty prevents the fusion from working. Rick demands to know the reason behind their uncertainty. He deduces that the two of them ‘want to be grandpa’s favorite’ and then sits them down in front of a whiteboard and cruelly tells both of them how little he cares about them and how little he values their contributions. His long speech clearly upsets both of them. Before Rick attempts to mend time together once again, Morty makes a quip about his drinking habits which directly result in Rick becoming uncertain. The time fusion fails for the second time and Rick immediately thinks that his ‘other self’ is trying to kill him off to fix the problem.