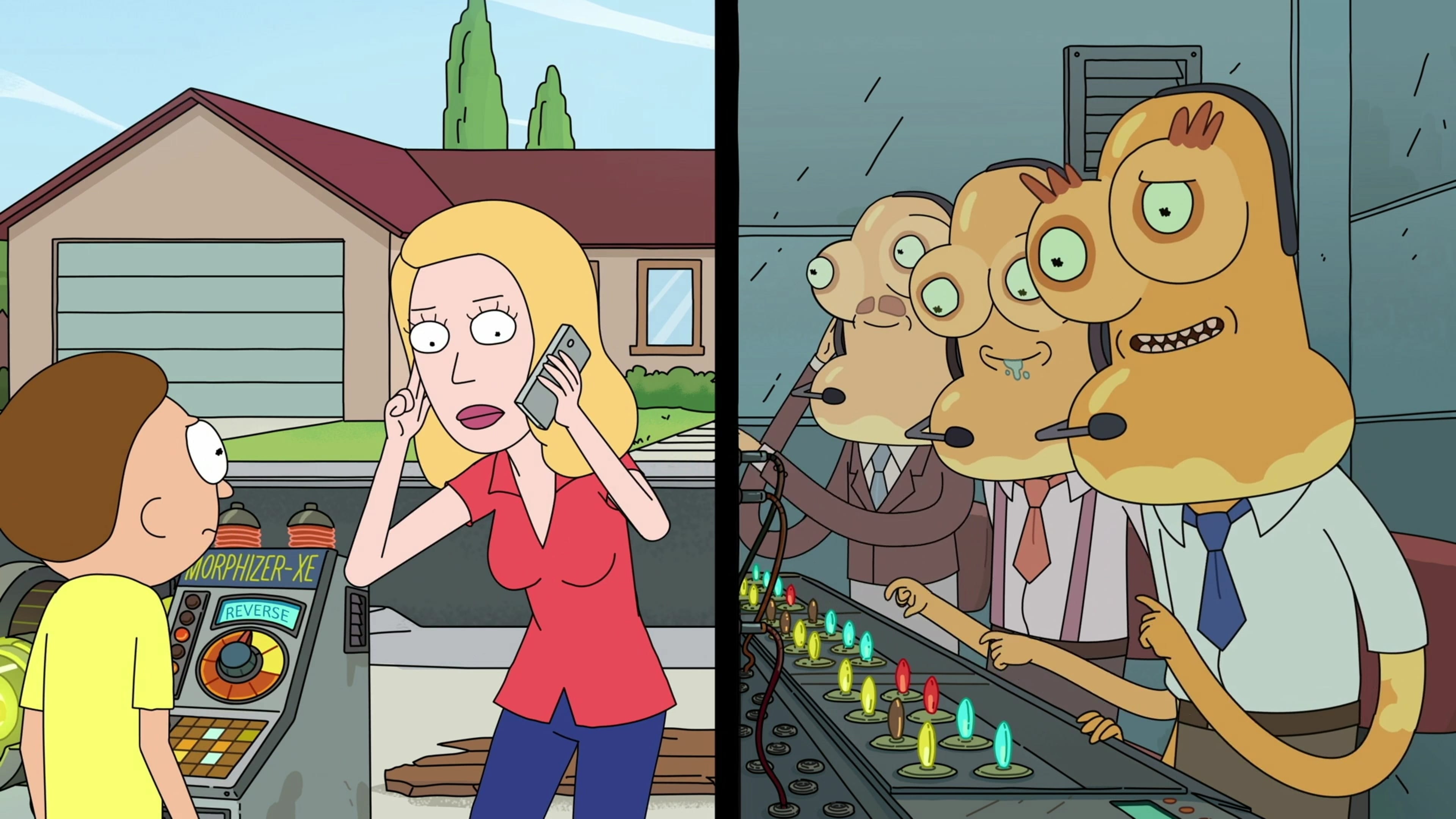 On the ride through space, Jerry questions Rick’s motive for inviting him, to which Rick explains he only did so at Morty’s behest, worried that his father might turn to suicide. Soon enough, the reluctant duo arrives at an intergalactic resort on another world. When Rick and a supposed enemy (Shnoopy Bloopers) kill each other, then immediately come back to life, he explains to a shocked Jerry that the entire facility is surrounded by an immortality field, meaning that even if Jerry tried to kill himself while on their vacation, doing so would be impossible.

After greatly enhancing his relationship with Rick, Jerry is quickly captured while using the resort’s restroom and is brought before an actual enemy of Rick named Risotto Groupon, whose people were enslaved after Rick sold weapons to their enemies. With Jerry’s help, he plans to assassinate Rick on a roller-coaster called the Whirly-Dirly, at the point where the ride travels outside the protective immortality field. When Jerry politely declines, Risotto allows him to leave unharmed.

Jerry continues to drink with Rick, however, during the conversation Rick admits that he was essentially the whole reason Beth broke up with him. His new view of Rick now shattered, Jerry invites Rick to join him on the Whirly-Dirly. However while on the ride Rick apologizes for breaking up the marriage and a guilty Jerry tries to change his mind, but can’t get Rick off the ride before it begins. After Jerry is shot and revived, Rick notices the assassins behind him and fights back. In the midst of the brawl, Jerry calls out to Rick and points to the area that dips outside of the field. Once the assassin has been dealt with Rick realizes something and asks Jerry how he knew about the kill point. He’s interrupted however when several more hit-men in a helicopter attempt to physically pull Rick outside the immortality field.

Rick quickly detaches his coat and detonates a bomb hidden inside taking out the chopper and sending the roller coaster crashing into the surrounding jungle and deactivating the resort’s immortality field in the process. A suspicious Rick asks Jerry how he knew about the Whirly-Dirly only for a fatally wounded assassin to reveal that they had made a deal. Having learned of Jerry’s involvement in his attempted assassination, Rick slow approaches Jerry causing him to back up into a massive alien snake and refuses to help as Jerry is slowly eaten alive by said snake. Jerry denounces Rick as a “self-righteous piece of shit” who stole his family. Infuriated, Rick volleys back by reminding Jerry that Beth was his daughter before she was his wife and that her life was stolen when Jerry got her pregnant at prom which subsequently lead to her being stolen from Rick.

Further, Rick claims that Beth had options, but she gave it all up because she felt sorry for Jerry. Citing that Jerry acts like he’s prey, but he’s really a predator that uses his pitiful nature as a way to manipulate other. As Jerry is about to be digested, Rick finally kills the snake and saves him, only to then use him as bait for another alien creature. Right when it seems like Jerry is about to be eaten, Rick shoots a tranquilizer into the creature and attaches wires to it, allowing him to control it and take them to an airfield with a shuttle that would get them close to the Milky-Way.