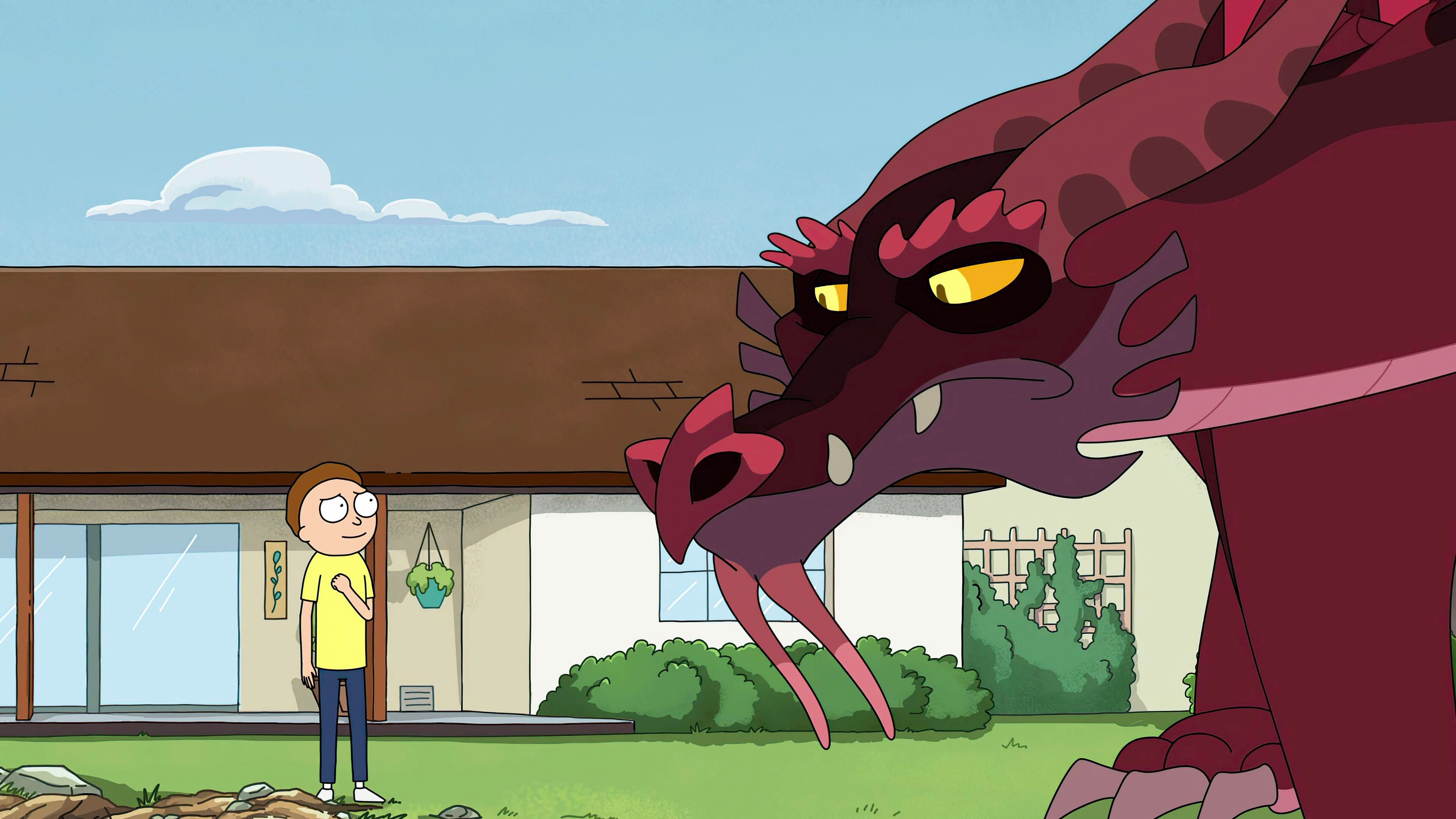 After the events of an adventure where Rick and Morty are seeking out a purple cube (which results in the death of their assistant Chachi), Morty reminds Rick that he was promised a dragon. When Rick tries to brush it off, Morty brings up how he agreed to help with the adventure in exchange for one. Irritated by his constant demands, Rick sprays Morty with a gas which inadvertently knocks them both out and causes the Space Cruiser to start veering out of control as they head back towards Earth. After crashing, Rick wakes up in the hospital to Beth reiterating Rick’s promise to Morty.

At home, a Wizard summons a dragon called Balthromaw and produces a blood oath contract that Morty signs, bonding him to the dragon forever.

After Morty receives his dragon, Jerry pulls Rick aside and inquires about a talking cat he found in the house; Rick mentions that he has no idea about it before leaving. Accepting it, Jerry asks the cat several times why it can talk but the cat tells Jerry not to worry about it; to go with the flow and not ask too many questions. And that they go to Florida.

After Morty flies around with Balthromaw for a while, they land for a break. While Morty puts on the pretense that what they have is a partnership of equality, Balthromaw only wants to laze around, which Morty roundaboutly shuts down.

The dragon retreats to a newly dug cavern underneath the Smith family yard; while Rick is watching TV with Summer, they both notice and poke fun at how dejected Morty is with a dragon. After Rick is nearly killed by the dozing dragon’s flame breath, he goes to kill it; after he ambushes Balthromaw, Rick takes a close look at the treasure that he is guarding and is amazed by some of the contents. He decides to not kill Balthromaw and they go off and cause havoc at a nearby zoo. Enjoying the other’s company, Rick and Balthromaw perform a “Soul Bond” ritual, connecting their souls together.

While this happens, both Morty and Summer witness this, causing Morty to lash out in anger. This breach of the contract summons the Wizard and, pronouncing Balthromaw a slut dragon for having bonded to multiple riders, whips the dragon (which Rick can feel due to their bond) and takes the dragon away to sentence it. Rick, Morty, and Summer than travel to the dragon world to save Balthromaw and undo their soul bonding.

Meanwhile, with Jerry and the cat, they had a nice time with a bunch of party-goers playing volleyball on the beach until one discovers some cat poop barely covered in sand. The cat quickly blames it on Jerry, causing the party-goers to chase Jerry away and the cat goes with the party-goers onto a nearby party yacht. After the cat is later thrown off the boat, it swims back to Jerry.