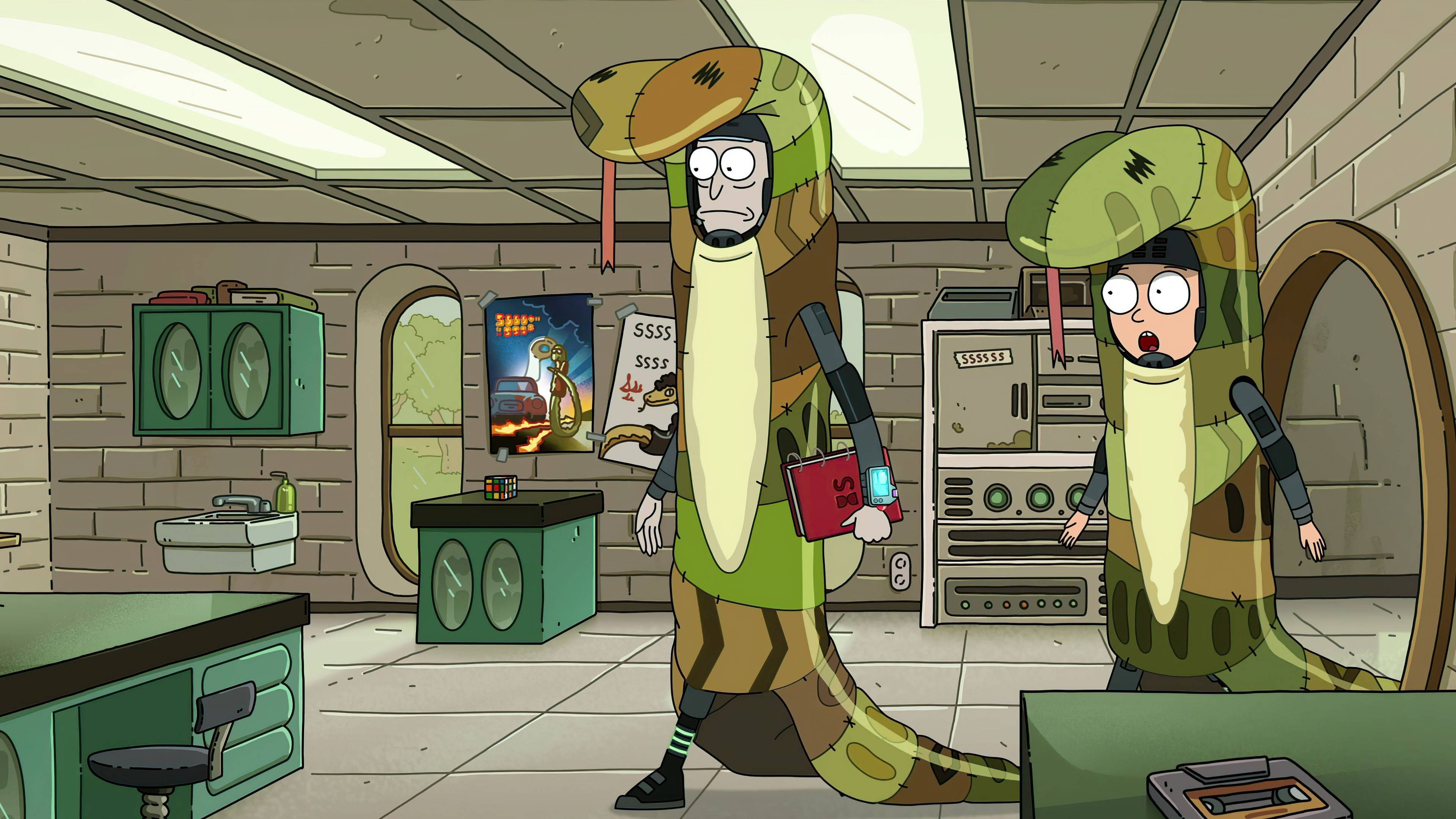 While getting ready for an adventure, Rick and Morty stop to talk to Jerry, who is on top of the roof, trying to set up Christmas lights. Morty passes on Beth’s concerns that Jerry will kill himself in the light-hanging process. Jerry says he can hang lights safely; Rick responds by accusing Jerry of lying. Jerry promptly falls off the roof, but before he hits the ground, Rick zaps him with a ray that makes Jerry’s body lighter than air. He then zaps Jerry’s shoes with a ray that makes them heavier than air, rendering Jerry “neutrally buoyant”. As Rick and Morty climb into the spaceship, Jerry celebrates his buoyancy, which allows him to jump high up in the air and then slowly sink back down. Remembering a warning that the ray will eventually wear off, Jerry sets a timer to keep track of how long he will be neutrally buoyant.

In space, Rick and Morty are arguing about piss and centipedes when (somehow) the spaceship hits “a sharp thing in space” and gets a flat tire. Rick puts on a spacesuit and goes out to fix the flat, giving Morty strict instructions not to follow. Morty promptly ignores these instructions, dons a spacesuit, and goes outside. Rick, who is fixing the flat, starts yelling at Morty to go back in the ship. While the two are arguing, a snake astronaut slithers up and bites Morty in the ankle. Morty kills the snake by breaking its astronaut suit with a hubcap, but it is clear he has been seriously injured.

Soon afterward, Morty begins to turn purple, a symptom of the poison that the snake injected into him when it bit him. Rick flies to the snake’s home planet, scans it, and synthesizes an anti-venom serum, which promptly cures Morty. The scan also reveals that the snakes on the planet have formed an advanced patchwork of industrial societies— there are 19 billion snakes divided into 10,000 nations, all on the brink of global war because of race. Rick remarks that the concept of racist snakes is hilarious, and begins to fly away. Morty, horrified that he killed an astronaut who might have been the snakes’ last hope for survival, and despairs that he is the reason “19 billion snakes lost all hope!” Rick responds that the snakes’ loss of hope is their own fault, reminding Morty that the snake astronaut bit its first alien contact.

On earth, we see Jerry bouncing into the city, where he sees a group of friends of many different races playing basketball together. Jerry asks to join the game, offering a bet that “this white boy can jump”. The players take exception to Jerry’s use of racial epithets, pointing out that the basketball court is the one place left in society that racism has not touched. Jerry tries to make amends, but ends up inadvertently implying that he is a Nazi. He decides to just try taking a jump shot, but as he jumps up, one of his shoes falls off, causing Jerry to go flying up into the sky as the basketball players look on, taking pride in the fact that their neighborhood has integrity.

After returning from the space adventure, Morty continues to blame himself for the snake planet’s impending doom. Having held onto the space snake’s body, he holds a vigil, where he hatches an idea on how to restore hope to the snakes. He goes to a pet store & buys a snake roughly the size of the space snake to take her place, whom he names Slippy. Morty proceeds to draw markings on Slippy similar to the ones the space snake had and then force Slippy into the space snake’s astronaut suit, being bitten multiple times in the process.

Morty then flies Slippy to the snake planet and throws her out the window. A parachute opens on the spacesuit, gently carrying Slippy down to the surface. Military officials from one of the nations on the snake planet detect Slippy and intercept her.