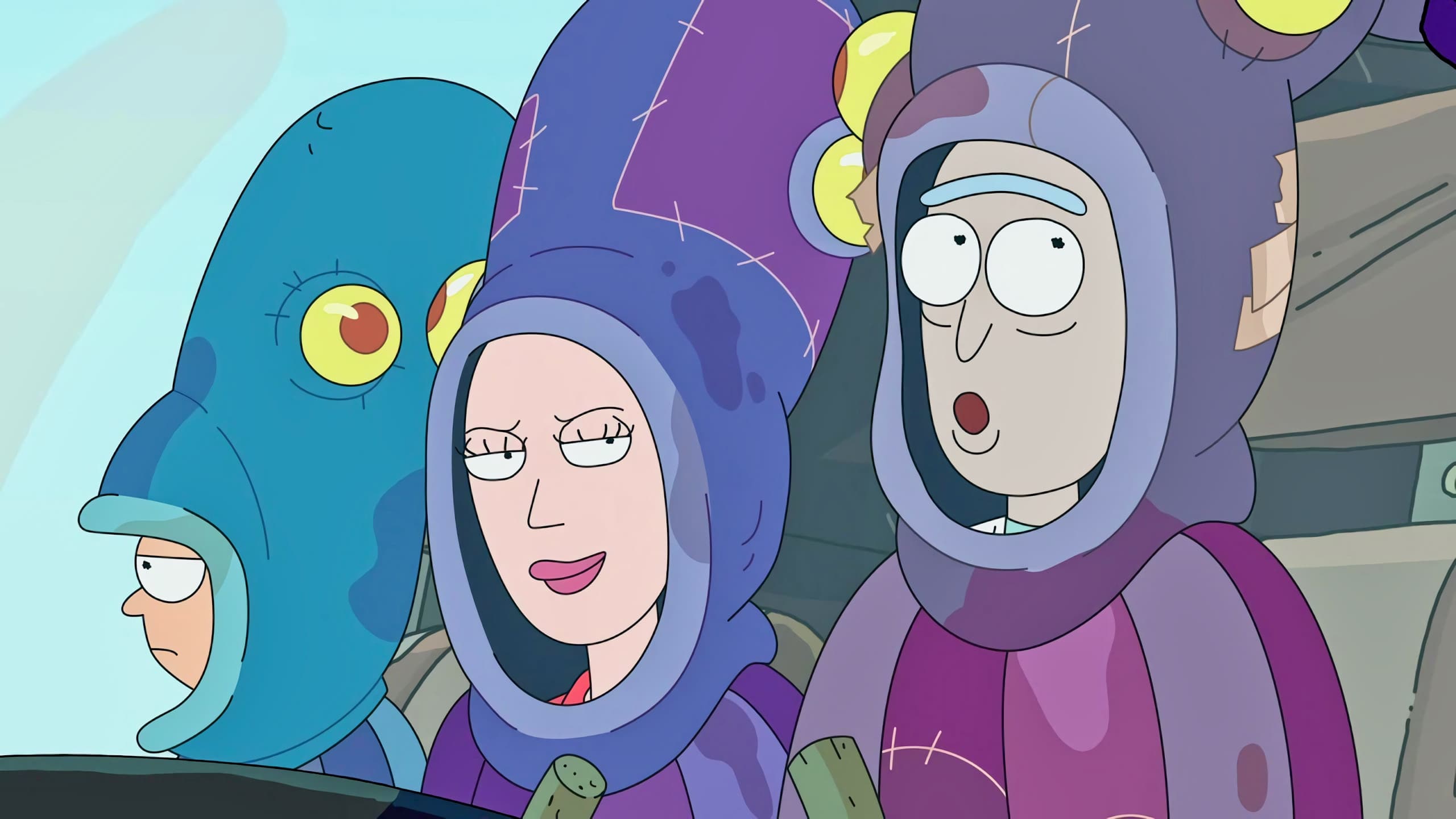 Rick and the family are eating when Rick tells the family God is real and has been sleeping for thousands of years, and he and Morty are going to sneak up into the clouds and kill him. Beth tells everyone Jerry is getting a job. Rick points this out as something wrong, then squid like creatures break into the house and shoot everyone one by one. Somewhere else, Mr. Always Wants To Be Hunted is asking to be hunted, and the family tries to grab him until Rick’s watch activates an alarm, showing that someone just killed a decoy family.

In the car, Rick explains that squid people are trying to hunt him down, and since the Space Beth incident, he has created various decoy families in various places around the country to protect themselves from any possible killers attempting to murder the family. However, the Smiths begin to argue, and as they do, the squids attack them from above and proceed to shoot their car to bits. However, they are quickly revealed as a decoy family. Another family is in Italy on vacation, and are ambushed and killed. In yet another house, a Rick and Morty notice that their decoy family has been destroyed and lock the house shut and proceed to watch a show about a time-travelling werewolf called ‘When Wolf’ on interdimensonal cable. However, their commentary on the show is interrupted when more squid people attack them, bombarding their house regardless of the security.

In yet another version of the Smith Residence, another Smith family takes notice. The five of them talk about it, and Summer asks if they are decoys themselves. This scares Rick as he tells Morty to check for a number on his butt. Morty looks and Rick farts. Jerry comes out with gluten-free, sugar-free, and lemon-free lemon squares, and Rick flies them in his Space Cruiser to one of the decoy houses. He enters and says the password, freezing them in place. Morty finds that the decoys are making decoys. Rick goes to his decoy and re-activates his head to ask questions before de-activating the being entirely. They drive around the countryside, and spot another Smith Residence created by another Rick, except Rick does not remember building them. They go to investigate, and another Rick says his password, freezing the other decoys. Seeing this, the first family hides as a second family comes into the scene. The second family unfreezes their decoy to ask questions, but realize that others are among them. Both sides accuse the other of being a decoy family, and they proceed to brawl, only to be destroyed by a fourth Rick and his family.

After Rick briefly explains what is happening, they disguise themselves as their mysterious squid opponents and shoot one of the ships down. They proceed to loot their ship, only to realize that the squids were actually a decoy family in disguise. A decoy Jerry throws a bomb, incinerating them. The commotion caused by the various decoy families has made various versions of themselves worried if they are decoys or real, leading to various deaths and families checking to see if they are real or not. One family is in the woods, fleeing the commotion when they are tranquilized by another decoy who takes them to his version of the Smith Residence. The decoy reveals himself to be a scarecrow-like version that was so poorly-made that he knew he was fake from the moment he was created; he harvests the skin of decoys to look more like them, and provides skin for his own version of the Smith family.