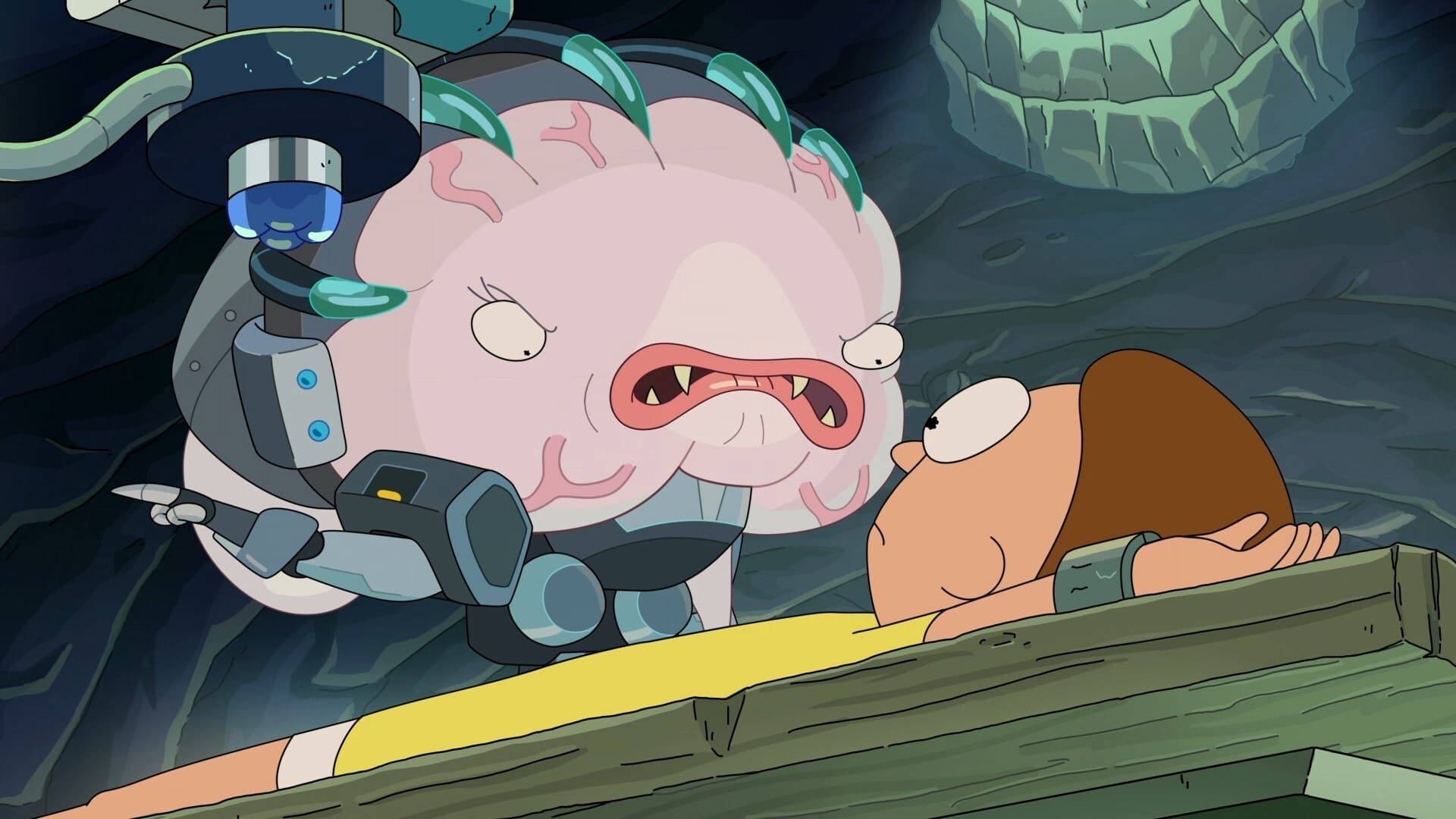 While at Beth’s workplace, Morty begs her to hurry up so they don’t miss the movie (in Beth’s words, “the new Marvel shit that the kids are jizzing about”), he notices the hospital’s horse breeding mount. Curious, and to Beth’s surprise, he quickly volunteers to work with her, with the purpose to use the mount to jerk him off. One week later, Morty relaxes at home, thinking back at his deed, before he notices a familiar barrel Rick brought back with him. To his shock, he learns that Rick borrowed a barrel of “horse semen” from the hospital to create a bioweapon, to be used on an underground race of cannibalistic horse people called “chuds” that he and Morty have been fighting.

After Morty frantically convinces Rick not to test the semen to verify that it indeed belongs to a horse, Rick proceeds to work on his experiment. A power surge goes through it and the barrel explodes. When Morty comes to, he sees that the sperm have mutated into floating, toothy monsters that eat humans. Rick blames himself, believing he brought in a bad sample, much to Morty’s guilt and relief.

The family is airlifted to the Pentagon’s war room by the President, where Morty agrees to lie for Rick and tells the President that they know nothing about the outbreak. The President brings in Professor Shabooboo, the world’s leading expert on sperm, who theorizes that the sperm will head to the Grand Canyon because if its vaginal shape. When he brings in a captured sperm monster and announces that he intends to analyze it, Morty shoots it to cover his tracks. At Morty’s suggestion, the President sends Rick, Morty, the country’s nukes, and a helicopter full of Marines to the Grand Canyon. The sperm, rapidly evolving, shoot down the plane with a trebuchet.

Rick, Morty, and two marines (one named Blazen that they believe to be incredibly cool) survive the crash, although the other marine is killed when the sperm attack. Morty saves a sperm with its tail stuck under a rock after it recognizes him as its creator, dubbing it “Sticky.” In the war room, Summer comes up with an idea to create a giant egg for the sperm to flock to, but has her idea stolen by Shabooboo.

Blazen leads them into the caves where the sperm are hiding, and ends up stabbing himself in the chest and accidentally revealing that he wears a thong, shattering Rick and Morty’s image of him. He asks Morty to not tell Sports Illustrated model Kathy Ireland that he is wearing her thong. He then attempts to perform autofelletio on himself before the sperm devour him. They then freeze Rick in crystallized semen and the two are led to a talking sperm in a mechanical suit known as the Sperm Queen, who reveals that Morty is the one responsible for their creation to a disgusted Rick.

Sticky breaks the two free and together they defeat the sperm. While Rick and Morty starting planting nukes along the canyon walls, they discover that the remaining sperm are all heading for Las Vegas. While expected due to the city’s history, Rick wonders why now. It is revealed that Summer has volunteered an egg, and the soldiers have planted it on top of the Luxor, planning to shoot it into space after all the sperm enter the egg. Morty radios the President and finally tells him the truth, which horrifies him and the nearby Smith family; not only because of Morty’s lack of self-control which led to the “Space Sperm” but the realization that this will lead to the birth of an inbred biological child of Morty and Summer; in short, a “Giant Incest Baby”.

The President orders Shabooboo to jettison the egg into space before any sperm can get to it, but learns that it will take thirty minutes with no way to bypass the timer. Shabooboo commits suicide to avoid any consequences after given credit for Summer’s idea, while Rick, Morty, and Sticky are captured by chuds.