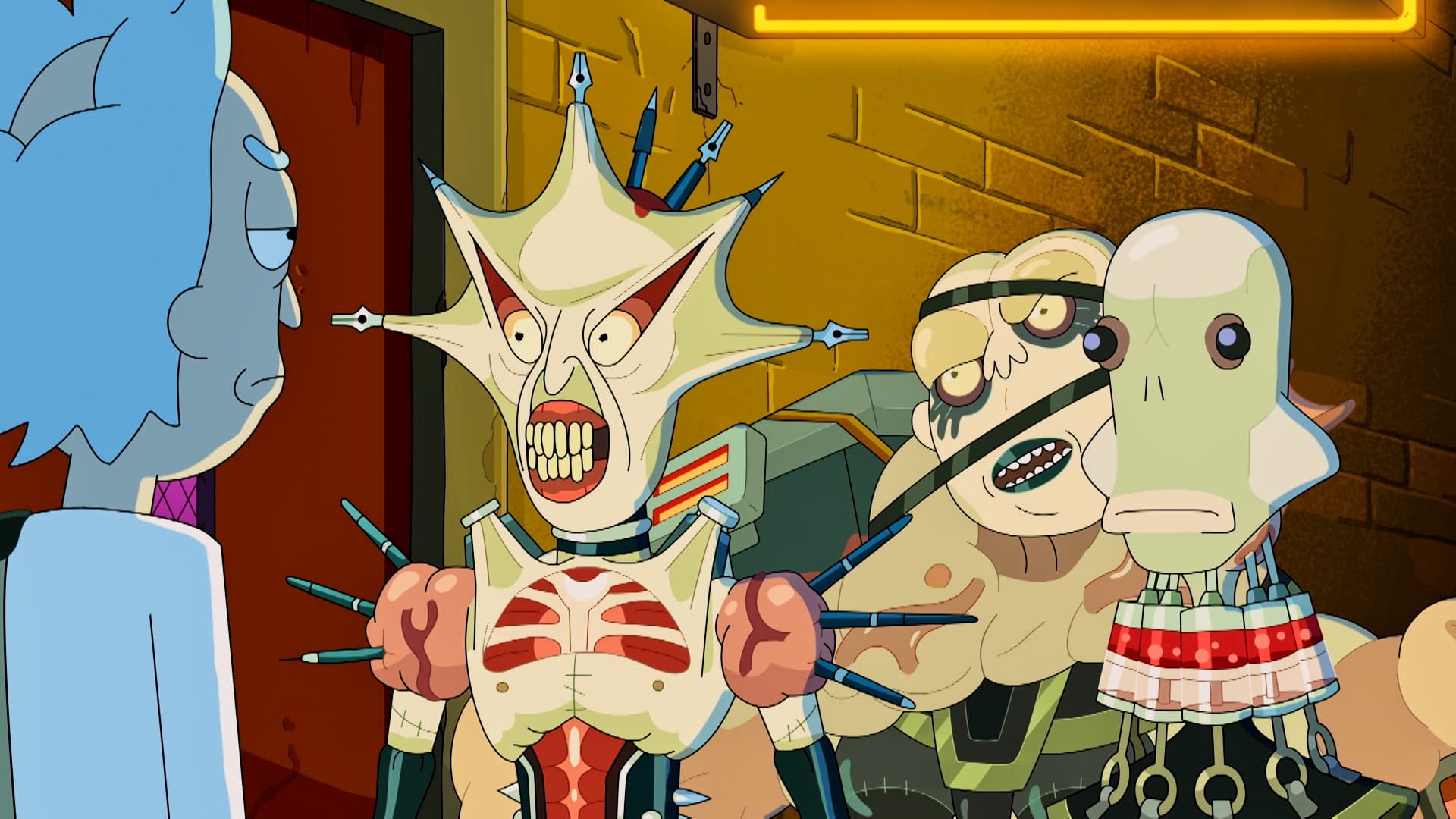 Beth asks Jerry to watch Morty and Summer due to an increased workload, but Rick stops her, shocking her by claiming he and Jerry are having a “guy’s night” and have been for a while. She leaves the kids alone under threat to not cause any trouble, while Rick orders them not to touch any of his things. Morty plans to invite over Bruce Chutback, a new student at their school, and Summer agrees to help him impress Bruce in hopes of getting some in with him. “Guy’s night” is revealed to be Rick letting Jerry hang out with demons who feed off of misery, paying back a debt he owes them for selling faulty skinhooks.

Bruce arrives. Morty and Summer try to impress him with interdimensional cable and wine, but he is instead taken with Rick’s car. The car’s defense system comes online when they try to take it, but Summer and Morty convince it that Rick is in danger and they need to take it to go save him. They fly around the universe, showing Bruce different planets and smashing up anthropomorphic mailbox aliens called “mailboxians” with a baseball bat.

Her work conflict resolved, Beth tracks Rick and Jerry to a karaoke bar and watches the demons enjoying Jerry’s fumbling. Rick admits he is using Jerry to keep the demons satiated, but Beth confronts them regardless. Having heard good things about her from Rick and wanting to meet Jerry’s wife, they invite her to drink “Essence of Hell” wine with them, and she accepts.

Midway through their joyride, the car’s system stops Bruce, Morty and Summer. It reveals that it has a recording of the entire night and plans to show Rick everything when he returns, using the time it has left to do whatever it wants and blame it all on the trio. The car uses a solar system as bait to catch and kill a gigantic god-like alien, then declares itself bored. It lets the kids get a meal before it takes them home and lets Rick punish them. Parking at a restaurant, it is dinged by a “Changeformer,” a robot that can turn back and forth between a car. Believing the car is a Changeformer as well, he invites it to hang out with them at a galactic ski resort and leaves. Bruce gets the car to admit its insecurity about being a virgin and suggests helping disguise it as a robot, in exchange for it not telling Rick about the joyride, to which it agrees.

A drunk Beth shares embarrassing stories about Jerry, which he takes in stride and does not understand that they are meant to make fun of him, only understanding when he overhears two demons talking about him while using the bathroom. Hurt, Jerry argues with Rick and Beth, boring the demons. They go on a rampage and kill everyone in the bar, taking Jerry through a portal to Hell, with Rick and Beth pursuing.

At the ski resort, the car has disguised itself as a Changeformer, only to have its fake head knocked off when the one who invited it tries to get a kiss. As he insults the car, it lights the room on fire and kills all of the Changeformers in a rage. It escapes the planet with Bruce, Summer and Morty still inside, with police in hot pursuit. Worried that they will be killed if shot down, Morty ejects them from the car and the trio is arrested.