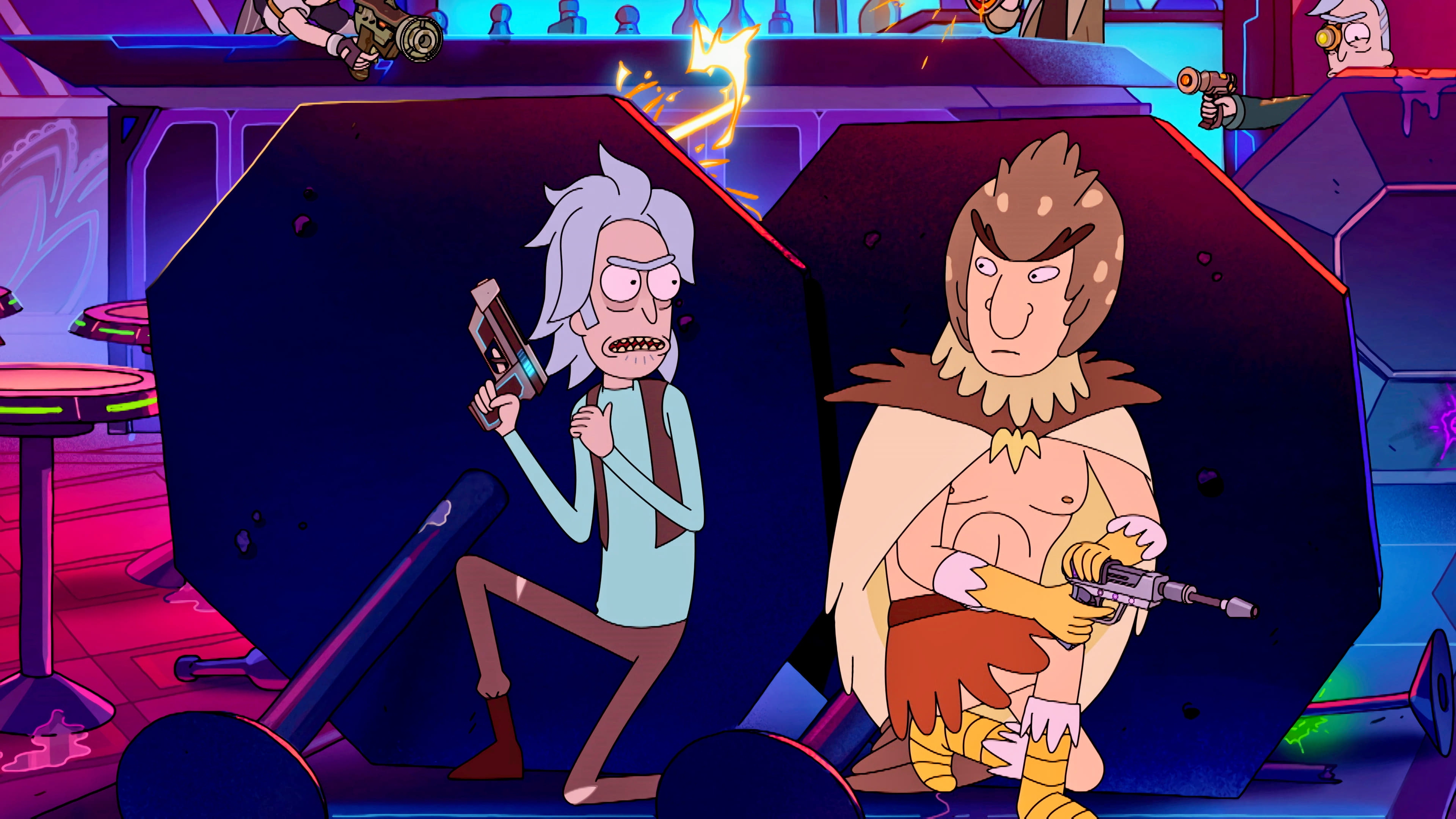 Leaving on a trip, the Smiths leave Rick home alone. When they leave, Rick goes to the garage and activates “Best Friend Rejuvenation Sequence,” which brings the cybernetic, half-dead Birdperson out of the wall Rick had stored him in in “Star Mort Rickturn of the Jerri”. Rick removes his cybernetic parts and tries to bring him back to life, but finds that his conscious mind is hiding inside his unconscious mind. With no other choice, Rick enters Birdperson’s mind to save him.

Rick arrives, nude, in the memory of their meeting at an alien music festival, using a bystander to point him towards Birdperson. He goes through a memory of a battle between Rick, Birdperson, and several Citadel of Rick agents, before landing in a memory of Rick, Birdperson, Squanchy, and several other Resistance fighters planning “The Battle of Blood Ridge”. Memory Rick notices him and Rick reveals to him that he is just a sentient memory, before incapacitating him and finishing a device that lets him track Birdperson through his mind.

He finds Birdperson observing a memory of him and Tammy together. Birdperson rejects his rescue attempt and flies away just as Gromflomite soldiers attack. Memory Rick joins Rick in the fight and the two win, going off to find Birdperson. In the garage, both Rick and Birdperson are having a seizure. The AI that control Rick’s garage notices neighbor Gene walking by, and convinces him to bring it as many batteries and solar panels as possible.

The Ricks track down Birdperson to a large red crystalline tree. They split up, Memory Rick entering Birdperson’s memories suppressed by the Federation after being transformed into Phoenixperson. Rick finds Birdperson making bombs out of rage, and, upon seeing Rick, he detonates them in an attempt to destroy his own mind. Memory Rick sees Birdperson’s death as the tree begins to collapse, and the Ricks run, not before Rick stops at the memory of his fight with Birdperson in “Star Mort Rickturn of the Jerri”, defeats Birdperson, and orders himself in the memory to give him his clothes. The destruction of the tree turns all of the Bird People nearby feral.

The Ricks go through the “PTSD-Station” to get to Birdperson, and end up in the Battle of Blood Ridge. Memory Rick, eager to see it, is delighted to find that the Resistance easily wins the battle, mostly because of the efforts of Rick and Birdperson. As Rick looks for a way out, Memory Rick observes that after the battle, Rick offered to take Birdperson to whatever reality they wanted to go to and stop fighting, but Birdperson rejected it, stating that it was not worth his integrity.

Birdperson has taken a Memory Tammy to watch the sunrise with him at their home, and both are ambushed by the Ricks. As Rick argues with Birdperson to try and take him back, he reveals that Memory Rick had learned that Birdperson and Tammy had a child, which was erased by the Federation. Birdperson decides he will live for his child, held by the Federation, just as the memory Federation attacks. The four steal a Federation car and drive through Birdperson’s memories.