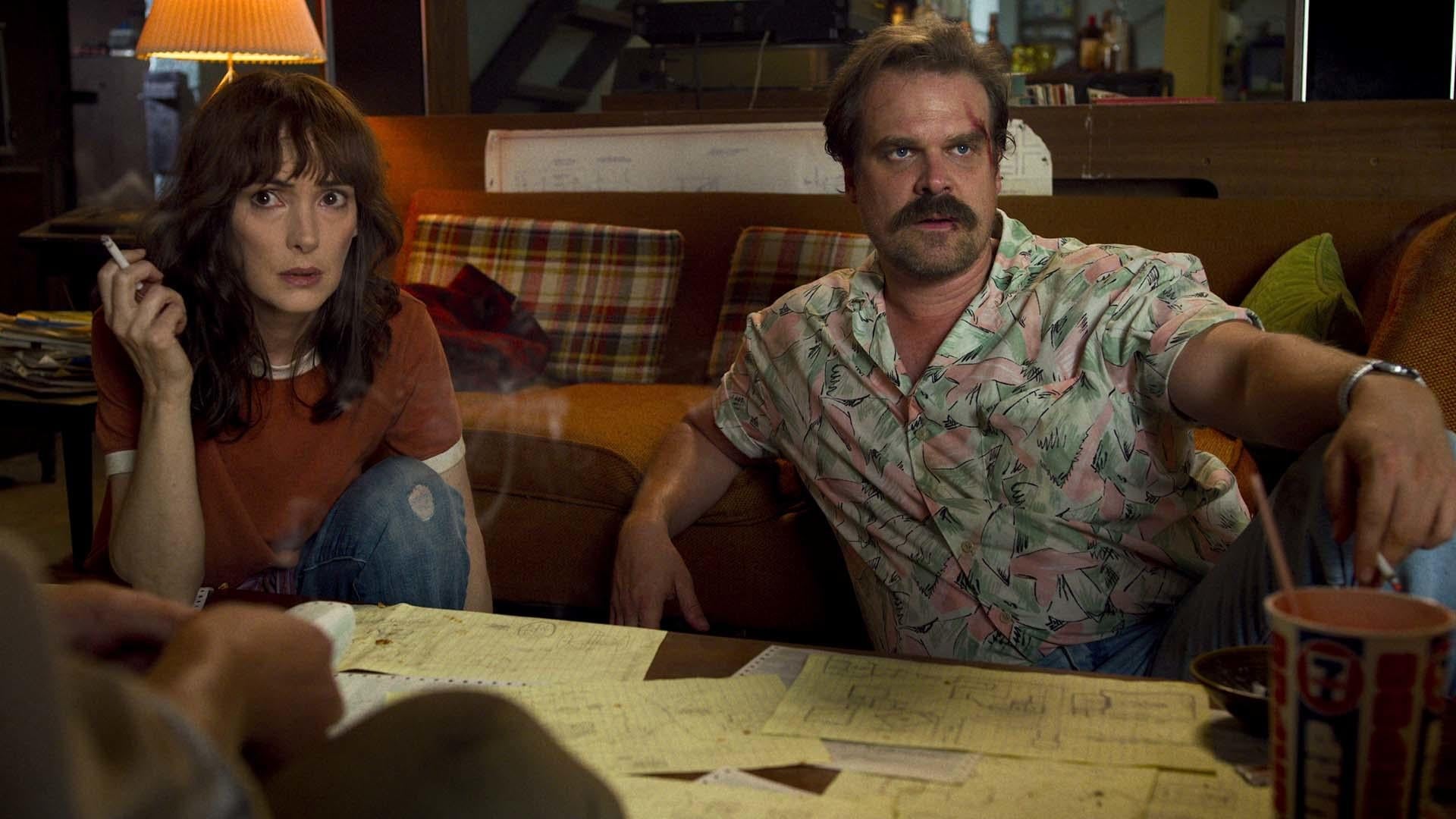 Picking up with Steve, Robin, Dustin, and Erica in the underground Russian base, Steve and Dustin recognize the portal the Russians are creating as a Gate to the Upside Down, describing it to Robin as “bad”, “end-of-the-human-race-as-we-know-it kind of bad”. They realize that the officer they incapacitated earlier is now gone, and an alarm begins to blare, so they retreat back the way they came as several Russian soldiers spot them. They race past the Russians’ electrical ray and then barricade the door to another area, Robin and Steve holding it fast while Dustin and Erica escape. Dustin screams “I won’t forget you!” before closing a grate over himself, just as the Russian soldiers break through the door and capture Steve and Robin.

At the hospital with Max, Lucas, Mike, and El, Will senses that the Mind Flayer is there, while a fleshy monstrosity several floors above screams again. It comes after Nancy Wheeler, who flees and barricades herself in a room. Although it cannot enter normally, it begins disintegrating into a viscous pile of flesh that proceeds to ooze under the door, reforming into a discrete entity. Although Jonathan Byers tries to come in after her, the creature attacks Nancy and is about to kill her when El arrives, blasts the door off of its hinges with telekinesis, and effortlessly tosses the creature from wall, to wall, to ceiling, and back to the floor again, crushing each surface it lands on with the force of impact.

The creature however, begins getting back up again as if being tossed around like a rag doll had been just a love tap. Seemingly unharmed, it lunges at El until she launches it backward through the window and out of the hospital to splatter onto the ground several floors below, where it once again begins to disintegrate into a viscous liquid that drains away into the sewers. From there it flows back to the basement of Brimborn Steel Works with Billy Hargrove and Heather Holloway, where it rejoins the greater mass of flesh that is the Mind Flayer. Billy then says, “it’s time”.

The Fun Fair at night

The next day, the Fun Fair is being livened up for Mayor Kline’s Independence Day festival. Kline yells at a food stall worker to get out of the “main thoroughfare” before he notices the Russian agent who bribes him, and they go inside a playground ride to talk. The agent is insistent that Kline find Jim Hopper within the day, and chokes Kline to make his point. Hopper however is still with Murray Bauman, Joyce Byers, and Alexei, the latter being interrogated. Alexei demands a cherry Slurpee instead of strawberry or he won’t talk, so Hopper drags him and throws him out the door with the keys to his cuffs and the car on the assumption that Alexei is more scared of his Russian comrades than of Hopper, that he’ll return. Alexei does indeed uncuff himself, start the car, and begin to drive away, but then he stops and brings the car back, throwing the keys to Hopper and saying he likes strawberry, too.

Meanwhile Dustin and Erica have been stuck in air ducts for roughly ten hours trying to make it back to the elevator to the surface, but are blocked from moving on by a fan. Dustin tells Erica about the Upside Down and Eleven and asserts that she is a nerd before finally disabling the fan, much to her chagrin. Their companions however are in much more dire straits, with Steve being tortured in an interrogation room. A Russian officer, Ozerov, queries Steve about who he “works for”, but Steve insists that he works for Scoops Ahoy, being in his work clothes at the time. Ozerov then changes tactics and asks how he managed to get into the facility.

Steve reiterates a lie that he lost his shipment and came for it when the loading bay turned into an elevator and he happened to be taken below. He assures them that no one else knows about the facility and then goes on a tangent about ice cream, which causes Ozerov to burst out laughing, saying “I like this guy”, before again demanding to know who Steve works for and having his torture resume.

Later Steve is dragged, unconscious, into another room with Robin. Although seemingly unharmed, she is slapped when she questions what they did to Steve, and they are tied to a chair together back-to-back. Ozerov approaches her, mockingly saying that Steve needs a doctor, and that they have “the very best” before Robin spits in his face. He then says that “you’re going to regret that” before departing.