The episode opens on the planet Sorgan with several krill swimming in a body of water. They are harvested by several human villagers with baskets. A woman named Omera watches over her daughter Winta, who is chasing a frog. The frog slips away. Birds flutter overhead. Just then, they hear some movement and roars.

Blaster shots are unleashed on the villagers. Under the hail of blaster fire, Omera rushes for Winta and carries her into a lone. Several Klatooinian raiders charge into the village, looting their supplies and harvest. One even strikes an astromech droid in the head. Omera and her daughter hide under a wooden cage while the raiders march away. Omera hugs Winta as she surveys the carnage left behind.

Meanwhile, the Mandalorian travels through space aboard the Razor Crest. The Child sits near the console and gazes up at space. He fiddles with the control, causing the ship to jerk. The Mandalorian scoops the Child up onto his lap. Studying a holomap, he decides to hide and stay low on Sorgan, a backwater world with no industry, large settlements, or spaceports. He thinks it will be a good place for them to lay low for the next two months like womp rats. He reassures the Child that nobody will find them here.

The Mandalorian brings the Razor Crest down into Sorgan’s atmosphere, flying over the village. Several villagers including Omera watch as the ship descends. After landing, he tells the Child that he will go out and have a look, promising not to take too long. He places the Child on his seat and warns him not to touch anything. He promises to find lodging and come back for him. He tells him to stay here and not to move.

The Mandalorian descends down the gangplank only to find the Child, who can walk, standing beside him. The Mandalorian relents and allows him to come along. They walk along a path. 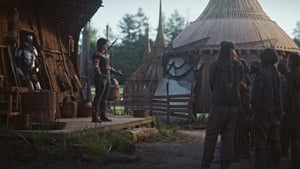