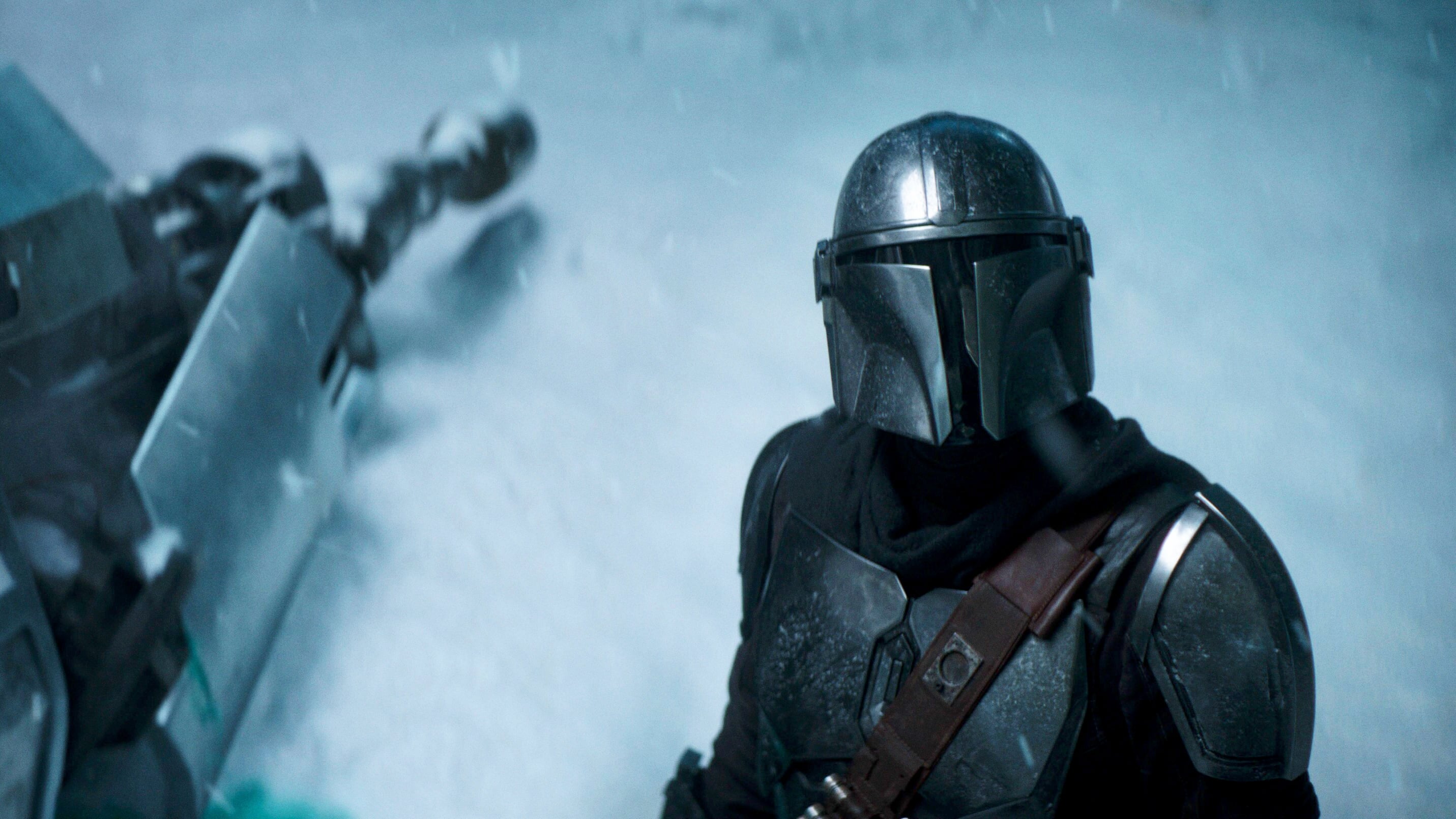 The Mandalorian Din Djarin and The Child race across the sands of Tatooine on a Zephyr-J speeder bike, returning to Mos Eisley following the successful hunt for the krayt dragon. In a gully ahead, a trio of raiders led by a Kajain’sa’Nikto set a trap by concealing a rope across the gully. As the bike passes, the raiders raise the rope, knocking Djarin off the bike, sending its cargo and The Child flying. Djarin uses his jetpack to steady his fall, and begins to fight off the raiders.

An alien points a rifle at him, but Djarin uses his fibercord whip to pull the rifle away, knocking his two assailants out. The alien grabs the Child, holding a knife to his throat. Djarin threatens him at first, saying if he hurts the Child, there is nowhere he can hide, but then suggests a bargain, offering to trade the valuable cargo in the wreckage, including Boba Fett’s armor and a hunk of krayt dragon meat. The alien considers the offer, then demands Djarin’s jetpack. He agrees, removing the jetpack and placing on the sand. The alien places the Child on the ground, then grabs the jetpack and runs away. Djarin picks up the Child, then activates the jetpack with his wrist gauntlet controls, sending the diminutive alien high into the air and dropping him to his death.

Another lead
With his speeder bike destroyed, Djarin heads to Mos Eisley on foot, arriving at nightfall and heading to Chalmun’s Cantina. At the Cantina, he finds Peli Motto playing a game of sabacc with Doctor Mandible. Motto sees Fett’s helmet among Djarin’s cargo, and asks why he found a Mandalorian and killed him. Djarin replies that he wasn’t Mandalorian and that he bought the armor from him by killing the krayt dragon.

Djarin laments that Cobb Vanth was his last lead on finding other Mandalorians, but Mandible says he may be able to help if Djarin covers his wager for the sabacc round to the tune of five hundred credits. Djarin reluctantly agrees after Motto tells him the insectoid is “on a hot streak,” but when he places the bet, Motto reveals she is holding an Idiot’s Array, and wins the round. Mandible agrees to send his contact to the hangar, who can reveal the location of other Mandalorians.

The passenger
At Motto’s hangar, her Treadwell droid is roasting the krayt dragon meat using the heat of an engine blast. Motto enters the bay after speaking to Mandible’s contact, telling the droid not to overcook the meat, which she prefers medium rare. She tells Djarin that there is a Mandalorian covert in the next system. She tells him the information is free—apart from her finder’s fee—but that the contact wants passage to the system. Djarin agrees to the arrangement, but she also stipulates they must travel there without using the hyperdrive. Djarin says the deal is off, as sub-light travel is too dangerous.

Motto insists there are mitigating circumstances, and introduces the contact: a female of a frog species carrying a canister containing several eggs floating in liquid. Motto explains that the cargo is the Frog Lady’s spawn, which must be fertilized before the equinox to continue her family line—hyperspace travel will kill the eggs. Frog Lady’s husband has settled on the estuary moon of Trask in the Kol Iben system, where Frog Lady confirms her husband has seen Mandalorians. Djarin agrees to take the job, and they board the Razor Crest.