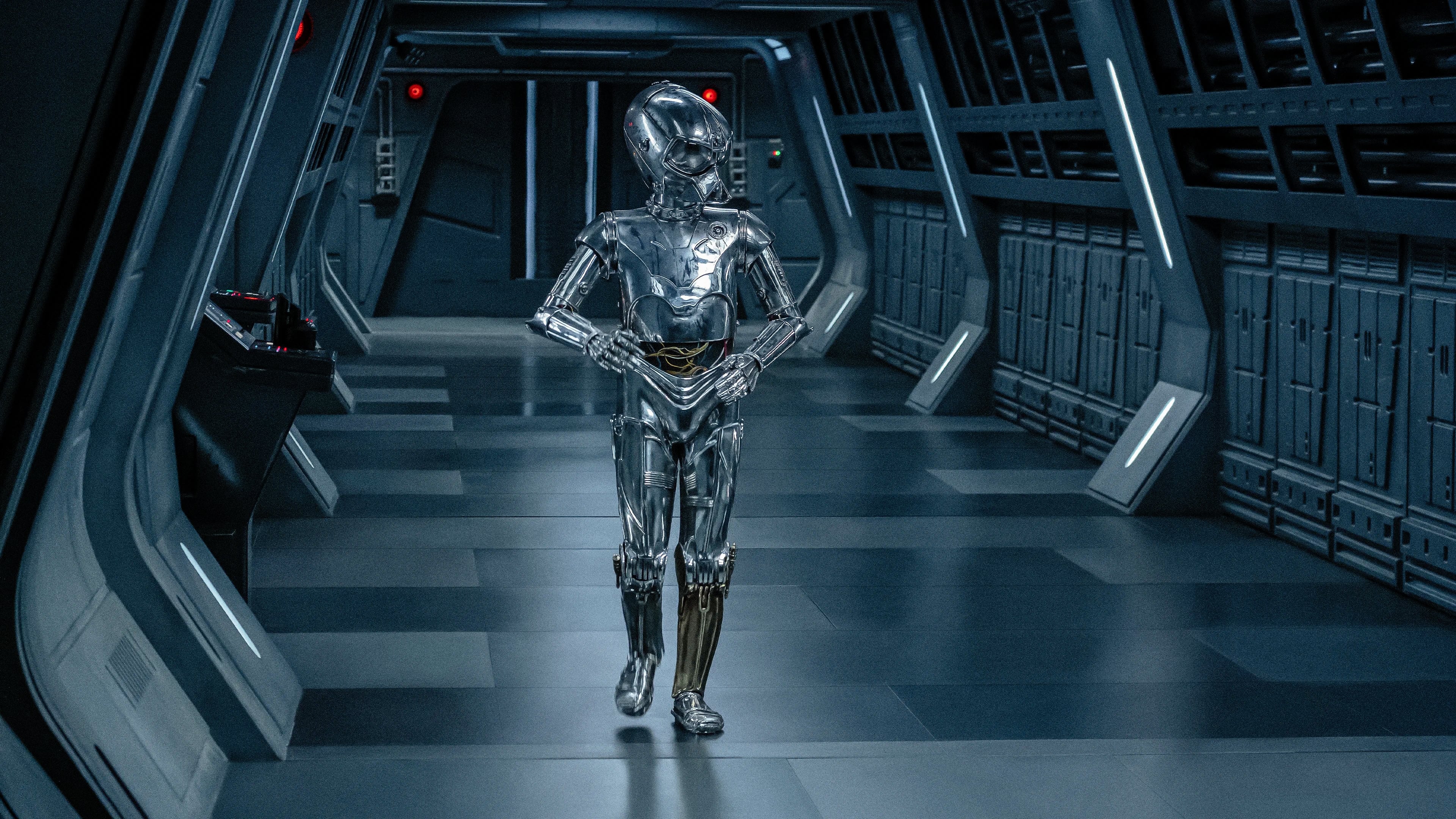 A Lambda-class shuttle weaves through space, evading heavy laser fire from Slave I. On board the shuttle, Dr. Pershing asks the pilots about what was happening and who they were being pursued by, but the shuttle co-pilot tells him to shut his mouth as this isn’t his laboratory. On board Slave I, Boba Fett targets the shuttle’s engines and fires an ion cannon, disabling its avionics and comms. Fett orders the shuttle to deactivate its shields and transponders, and prepare for boarding. Dr. Pershing suggests they fight the pirates, but the co-pilot refuses, saying he doesn’t have a death wish.

Slave I docks with the shuttle, and the Mandalorian Din Djarin enters the cockpit. The co-pilot stands, and tells Djarin that before he makes a mistake, he should know that the passenger is Dr. Pershing. Djarin says they’ve met, then addressing Pershing asks if Grogu is still alive. Pershing confirms he is, and is on board Gideon’s light cruiser. The co-pilot grabs Pershing, holding a blaster to his head. Cara Dune enters the cockpit, blaster also raised. The pilot tries to bargain for his freedom, saying he’s not with the co-pilot and they can work something out.

The co-pilot shoots him dead, then explains to Dune and Djarin that Pershing is a top-tier New Republic target, a clone engineer, and if he dies because of them, Dune will wish she never left Alderaan. He says he recognized her tear tattoo, then goads her, saying he saw the destruction of her planet aboard the Death Star. Dune mockingly asks which one, and he angrily tells her that millions died on those bases, and that the destruction of Alderaan was “a small price to pay to rid the galaxy of terrorism”. Having had enough, Dune shoots the co-pilot in the face, narrowly missing Pershing, who screams and clutches his ear. Djarin watches as Dune turns and walks out.

Mandalorian help
Slave I arrives at a planet dotted with large refineries, and lands among a number of parked starships, including a Gauntlet fighter. In a nearby cantina, a hush falls as Djarin and Boba Fett enter and cross the room to approach Bo-Katan Kryze and Koska Reeves. Djarin tells Kryze he needs their help, and she replies that not all Mandalorians are bounty hunters, and that some of them serve a higher purpose. Djarin tells her that Moff Gideon has taken the Child, and she says they’ll never find him. Fett tells Djarin they don’t need these two, and that they should leave. Kryze says to Fett that he is not a Mandalorian, to which he responds he never said he was. Fett and Reeves begin to argue, but Kryze tells them to “save it for the Imps.”

Djarin tells them they have Gideon’s coordinates, and that he has a light cruiser which could help her regain Mandalore. Fett scoffs, saying the Empire had reduced Mandalore to glass, and Bo-Katan retorts that he is a disgrace to the armor. Fett says the armor belonged to his father, but Kryze mocks him, saying “Don’t you mean your donor?” She says he’s a clone and she’s heard his voice thousands of times before. Fett says it may be the last voice she hears, and Reeves leaps up, swinging at him, and the pair fight before Bo-Katan orders them to stop. She agrees to help them take Gideon’s ship and the Darksaber, which she will then use to retake Mandalore, and asks Djarin to reconsider joining their efforts.