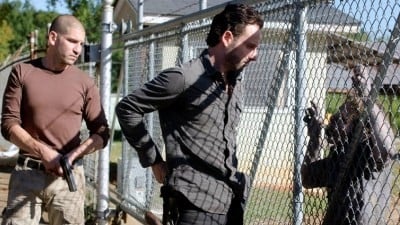 One week has passed since Rick brought Randall back to the farm. Now that the man is sufficiently healed, Rick and Shane are transporting him to a faraway area. On the way, Rick confronts Shane about Otis’ death. He also tells him he knows about his attraction to Lori. Shane admits to it, and apologizes.

The men decide to drop Randall off in a town 18 miles from the farm, leaving him only with a knife. Randall begs the two to keep him, and unintentionally reveals that he went to school with Maggie. Rick and Shane deduce that it’s possible that Randall knows the exact location of the farm, and could lead hostile outsiders back with him.

Shane attempts to kill Randall, but Rick stops him. He believes they should discuss their options first. The disagreement escalates into a physical battle, during which Shane inadvertently releases a horde of walkers. Rick, Shane and Randall barely escape alive. Randall is gagged and bound. Rick tells Shane that he should obey his orders from now on.

Back at the farm, Beth contemplates killing herself. Lori and Andrea argue over whether they should keep her on suicide watch, or allow her to do what she chooses. Andrea talks to Beth, telling her that the pain will not subside, but can and should be coped with. She opens the bathroom door for Beth. Beth smashes the bathroom mirror and slits her wrist.

Her suicide attempt is half-hearted, though, and Lori and Maggie are able to easily bandage her injury. Maggie is furious with Andrea, realizing that she had allowed Beth to attempt suicide. She forbids Andrea to enter the house again. Andrea defends her actions, saying that Beth explored her choices. Her attempt convinced Beth that suicide is not an option.