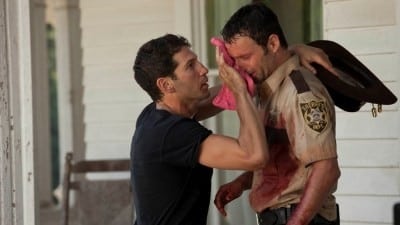 Before the apocalypse, Lori waits for Carl as he gets out of school. She tells a friend that she had an argument with Rick the night before. Meanwhile, Shane arrives and tells her about Rick’s injury. He prepares to take her to the hospital, where Rick is undergoing emergency surgery.

As the flashback ends, Rick runs to seek help, carrying Carl in his arms. Shane follows them with Otis, the hunter who had accidentally shot Carl. They reach a farm, and Carl is attended to by an old man named Hershel. The bullet buried in Carl’s chest has shattered into six fragments, and Hershel needs Rick’s blood for a transfusion. Hershel withdraws one fragment but concludes that he’ll needs surgical supplies to remove the other five.

Shane and Otis, looking for medical supplies, head to an abandoned FEMA evacuation center at a former high school. The location is now surrounded by Walkers. Meanwhile, Rick asks that they send Maggie, Hershel’s daughter, to the caravan. He wants her to bring Lori to the farm.

Dale finds that T-Dog has an infection (non-walker in nature) in his arm, and will need to take antibiotics. The group agrees to spend the night on the road waiting for Sophia, and then travel to Hershel’s farm in the morning. When Lori finds out that Hershel is a veterinarian, she fears for the fate of Carl. Meanwhile, Shane and Otis get the necessary supplies, but are soon under siege by dozens of walkers at the high school.