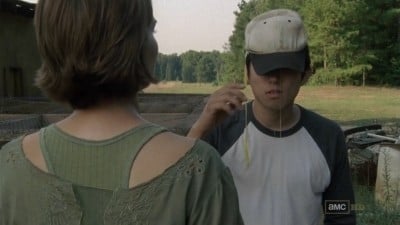 Glenn finally tells everyone that there are walkers in the barn. The group discusses how they should proceed; Shane believes they should be killed, but Rick says they need to respect Hershel’s wishes since they are guests on his land. Rick then confronts Hershel, while trying to convince him to let the group stay. They are interrupted by Jimmy, who tells Hershel they captured more walkers.

Shane goes after Dale, wanting the weapons to take care of the walkers in the barn. Dale, however, has snuck away from the RV, taking the weapons with him. Shane finds Dale and confronts him. Dale says he knows what kind of man Shane is and what he did to Otis. Shane threatens Dale, then takes the weapons back to the farm. Rick sees what Shane is planning and tries to stop him. It is too late, though, as Shane throw open the barn doors to release the walkers. Everyone shoots them, while Hershel and his family watch in horror. The last walker then emerges from the barn. It is Sophia. Everyone is stunned into silence by what Sophia has become. Carol watches in tears, as Rick steps up to her daughter and shoots her in the head.