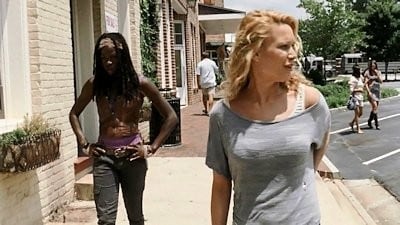 
Plot : Walk with Me

This episode answers one of the series’ big questions: What was that helicopter that seemed to be patrolling the Georgia countryside?

Andrea and Michonne witness the helicopter crash in the near distance. Upon investigating, they spot another group of survivors, led by The Governor, who saves a surviving soldier. It quickly becomes apparent that Michonne doesn’t want anything to do with these strangers, as she readily sacrifices the docile Walkers she’s been traveling with when they start to make noise. It’s all for naught, however, as Merle – complete with his nifty new appendage – stumbles across his old acquaintance and her traveling companion.

Later, Andrea finds herself being tended to by a nurse, and after some catching up with Merle, she meets The Governor, as he shows up to check on her condition. He tells the women to stay and get a good night’s rest; their weapons will be waiting for them on the way out. After a brief discussion, the man reveals that anyone who dies will turn, a shocking surprise to the women. Andrea and Michonne are then introduced to “Woodbury”, a small town with 73 residents.

We meet another of The Governor’s men, Milton, who is studying Michonne’s pet Walkers, taking note of why they’re docile. Later, The Governor speaks to a survivor of the helicopter accident, Welles, who informs him of how he left ten men behind so he could scout ahead. The Governor promises that if the men are still alive, he will bring them back.

The next day, The Governor and several guards drive up to the location of the surviving soldiers. He waves a white flag and informs the soldiers of the helicopter accident. He asks for their help, and to come back to town with him. As the troops let their guard down, they get ambushed and killed by The Governor and his men.

The Governor returns to Woodbury, bringing with the military vehicles, weapons and supplies. He gives a speech to the town about how he was too late to save the soldiers, and everyone should honor their sacrifice. He gives thanks for the supplies they left behind. Michonne appears to be the only one doubting his story.

That night, The Governor’s returns to his apartment. After he takes a look at a seemingly old photo of his wife and daughter, he heads into a secret room. As he sits in his recliner we see an enlightened look on his face, as he stares at some fish tanks filled with 27 heads. Among them are the newly added ones of Michonne’s pet walkers, and the helicopter pilot Welles.