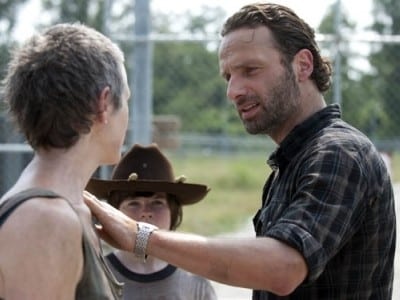 In the arena, The Governor declares that Merle and Daryl will fight to the death. The two manage to fake it until Rick and the rescue team come to their aid. Later, the group rendezvous with Glenn and Michonne at the car they had parked nearby. Maggie and Glenn are appalled that Merle is with them. Merle informs the group that Andrea is sleeping with The Governor. The group is shocked to learn Andrea is alive and well in Woodbury. They refuse to let Merle return with them, so Daryl leaves with his brother. Rick tells Michonne that she can only stay at the prison until she’s healed from the injuries she suffered fighting The Governor. Glenn, on the way back to the prison, lets out his rage at Rick for his decisions. Maggie calms him down.

Back at the prison, Hershel warns Tyreese that his group might have to leave when Rick returns. Allen wants to ambush them, but Tyreese and Sasha shoot the idea down. When Rick returns he almost completely ignores Tyreese’s group. That night, Hershel tells Rick that Michonne won’t be well enough to travel for another couple of days. He convinces Rick to let her stay for as long as it takes. As for Tyreese’s group, despite their sincerity, Rick refuses to let them remain. Rick then hallucinates Lori in the shadows, and becomes frantic, waving his gun around and yelling Get out!” Not understanding who Rick is screaming at, Tyreese’s group starts to back away. Everyone stares at Rick as he frantically paces the common room.

Back in Woodbury, chaos ensues. Some Walkers, who made it in during Rick’s attack, are still attacking the citizens. People are being blocked from leaving the town. The Governor remains in his apartment, and only comes out to put down a bitten citizen. Andrea urges him to reassure the populace, but Philip refuses. He confesses to Andrea that he held her friends captive. He then hurts Andrea by insisting that she is “just a visitor”. Later, Andrea rallies and pacifies the crowd with promises of perseverance and rebuilding. The Governor watches from his window.