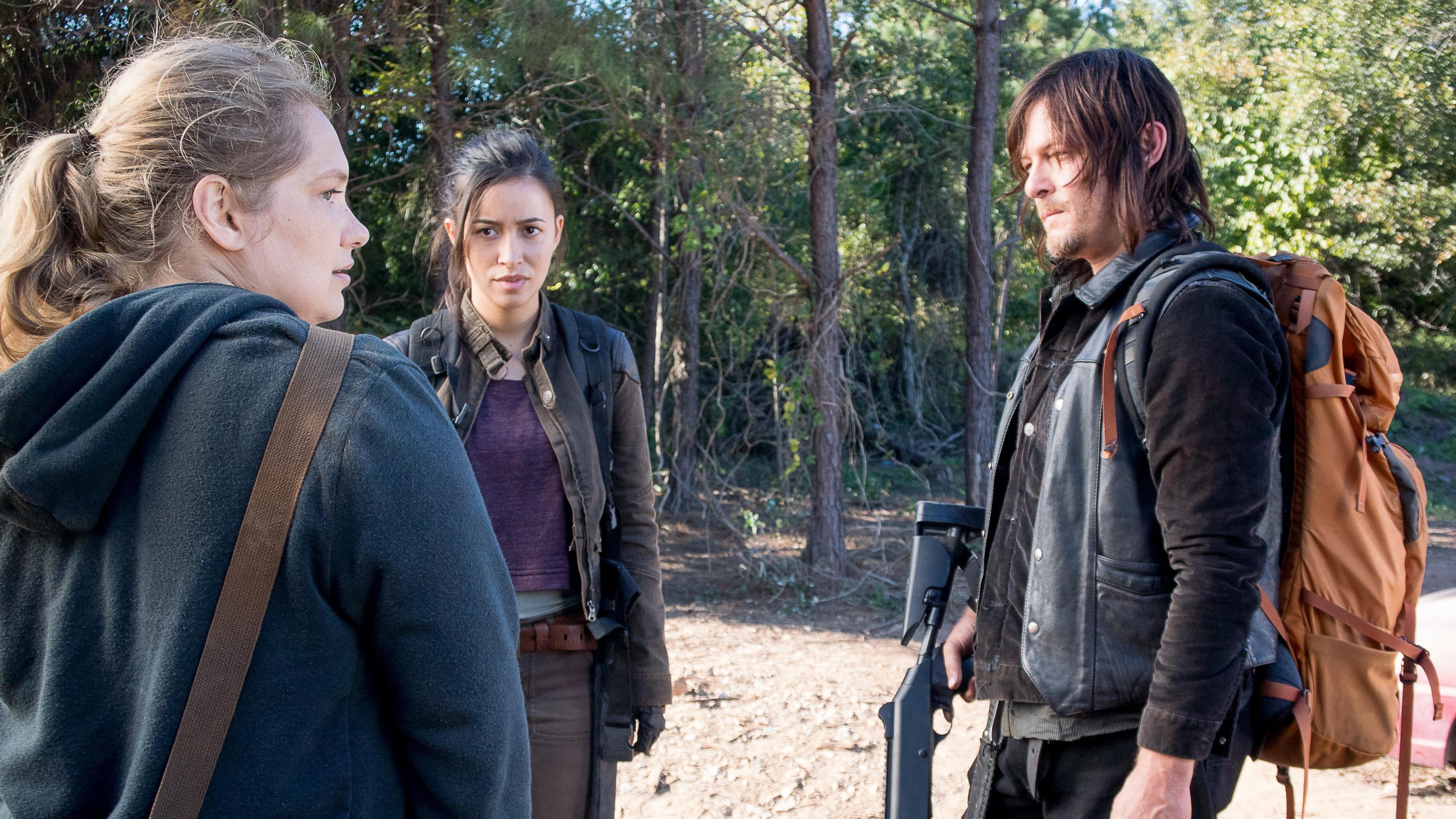 Two different supply runs take place on the same day. Daryl, Rosita, and Denise go to a pharmacy Denise had spotted on an earlier journey. She feels that there may be important medicines there. Meanwhile, Eugene and Abraham go to an abandoned factory, where Eugene has found the equipment needed to make bullets.

Eugene and Abraham argue over whether Eugene has “leveled up” (to use the Role Playing Game terminology he employs) to being more of a survivor. Abraham offends Eugene by insisting that he is still helpless. He humiliates him further when Eugene tries to finish off a Walker (whose head was accidentally reinforced by a lead spill), only to have Abraham step in and take over when it appears that Eugene is about to be killed.

Denise struggles to help Daryl and Rosita look for supplies amidst the dead and rotting bodies. In the pharmacy she is traumatized by evidence that someone in the back of the shop turned and then ate his or her own infant child. Later, though, she bounces back, and proves to herself that if necessary she can kill a Walker. She begins to give her companions a pep talk, telling them that they shouldn’t be alone, and regretting that she had not reciprocated when Tara had earlier told her that she loved her.

Suddenly, in mid-sentence, Denise is killed by a crossbow bolt through the head. Dwight and a group of Saviors step forward, revealing that they have taken Eugene hostage. The group demands that Daryl and Rosita take them back to Alexandria, so the community can hand supplies and people over to Negan.

As Daryl is trying to work out an escape strategy, Eugene helps out by attacking Dwight, biting the man’s penis (through his pants). Abraham leaps forward from the bushes, firing on the Saviors with an automatic rifle. Daryl and Rosita join in the fight. They are unable to finish off the group, however, as Eugene suffered a gunshot wound in the melee. They take his unconscious body and return to Alexandria.

Later, Eugene is recovering quickly, in part thanks to the antibiotics that Denise had retrieved during the supply run. Abraham apologizes to Eugene, saying that he DOES have survival skills. “Welcome to Level Two”, he says. Abraham then seeks out Sasha, telling her that they both have options. They might survive in Alexandria safely for another thirty years, “but even thirty years wouldn’t be enough” time with her. Sasha is touched, and finally accepts Abraham’s advances, inviting him into her house.

As Carol helps Daryl to bury Denise, Tobin is shown reading a note Carol had left him. She had enjoyed their brief relationship, but now she intends to leave Alexandria. She feels that she cares too much, both for Tobin and for the community in general. If she stays any longer, she will eventually be forced to kill hostiles, living hostiles, again in order to protect her loved ones. She simply can’t bring herself to return to the cold-hearted survivor that she had previously become. She asks Tobin not to try to find her.