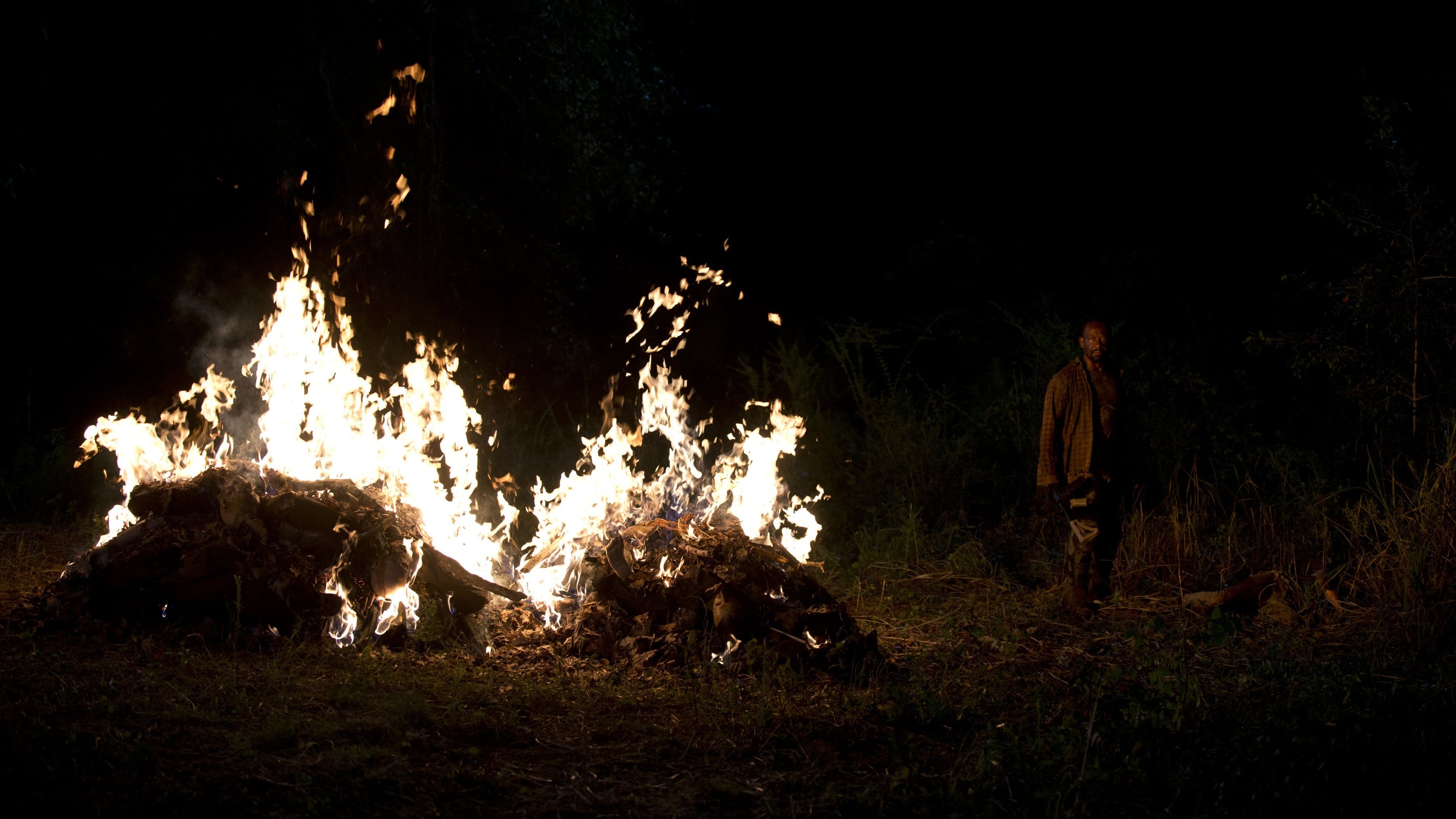 Morgan speaks to the leader of the Wolves, Owen. As it turns out, he had captured the man, only knocking him unconscious instead of killing him. Morgan relates to him a tale of his past:

Sometime after his second encounter with Rick, Morgan wanders through the woods and recreates his King County bunker at his camp site. He uses walker blood to scrawl messages on the surrounding rocks and trees. “Clear”, reads one; “Here’s Not Here”, another.

He eventually encounters a man named Eastman, who traps him for trespassing. The man was formerly a psychiatrist who specialized in evaluating jailed prisoners to help the state decide whether or not to grant them parole. Using his training, Eastaman deduces that Morgan is suffering from PTSD. Eastman takes it upon himself to help Morgan recover his sanity. Slowly, Morgan regain his senses, learns Aikido, and comes to believe that all life is precious.

One day while scavenging, Morgan nearly reverts back to insanity while visiting his old camp. After a Walker bites Eastman, Morgan fights him, only to lose. Morgan demands that his training be done “not here”. “Here’s not here”, Eastman replies.

Having returned to living at his old campsite, Morgan rescues a couple from a Walker. Although he is torn as to whether he should go ahead and kill the people, the woman chooses to interpret what he did as an act of kindness. She offers Morgan a can of food. He finally understands what Eastman was trying to teach him.

After Morgan returns to the cabin, Eastman confesses he had killed a man before, an escaped prisoner who, angered that Eastman had attempted to prevent his parole, went on to kill Eastman’s entire family. Eastman built a cage in his cabin, the same cage Morgan had slept in for the last few months, and then locked the killer inside, allowing him to slowly starve to death. The act of violence, however, didn’t give Eastman any peace, He only found peace when he decided to never kill again.

After Eastman has succumbed to his wound, Morgan leaves the man’s cabin, and goes in search of Rick.

Back in the present, Morgan finishes telling his story. Owen then explains to him that part of the reason his people had invaded was so he could get some medicine to treat a previous wound he had suffered, which now has become infected. Owen is unrepentant, however, and tells Morgan that if he escapes, he will kill every last person in Alexandria.