STRANGER THINGS is a science-fiction horror web television series created, written and directed by the Duffer Brothers, and executive-produced by Shawn Levy. The show was released as a Netflix original series premiering on July 15, 2016. The show takes place in the fictional town of Hawkins, Indiana in the early-to-mid 1980s. When a young boy vanishes, Hawkins becomes engulfed in an extraordinary mystery involving secret experiments, terrifying supernatural forces and one strange little girl…

Young Will Byers is cycling home from a disappointing “Dungeons & Dragons” campaign at a friend’s house, when a terrifying figure suddenly appears… Will tries to escape and hide, but he is abducted…

Will’s friends Dustin, Lucas and Mike begin investigating his disappearance; while looking for Will in the local forest, the boys find a girl with a shaved head in a hospital gown, who they let stay in Mike’s basement. They learn her name is Eleven and that she has psychokinetic abilities.

Will’s mother Joyce becomes transfixed by supernatural events affecting the house electricity – she’s convinced Will is communicating with her. As these strange events continue, she witnesses the same monster that took Will, which threatens her on numerous occasions. Meanwhile, police chief Jim Hopper grows suspicious of the nearby national laboratory after he finds a torn piece of hospital gown outside the lab grounds. Mike’s older sister Nancy attends a pool party hosted by her new boyfriend Steve, begrudgingly accompanied by her best friend Barb. Jonathan, Will’s brother, witnesses the events of the party, taking photos. While alone, Barb is abducted by the Monster. 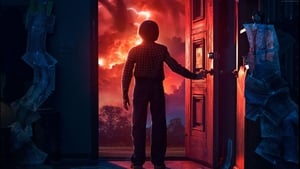